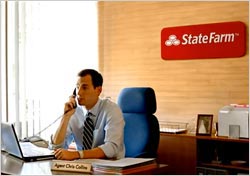 For the fourth consecutive year, State Farm is the title sponsor of the 2012 Billboard Latin Music Awards, according to Telemundo Media, which announced the deal on April 23.

For the first time ever on Spanish-language television according to Telemundo, the awards show will be Shazam-enabled, allowing viewers and fans to get immediate access to more information about their favorite artists walking the red carpet, including links to artists’ Web pages for videos and pictures, as well as the ability to buy music directly through the Shazam mobile application.

The State Farm sponsorship is under the campaign theme “Sounds of Mi Vecindario” (Sounds of My Neighborhood). For the pre-show and red carpet arrivals, State Farm will have a branded area on the red carpet with Telemundo host Jessie Camacho, who will interview featured artists and ask them how their neighborhoods influenced their music, as well as monitors displaying a designated Twitter wall on Telemundo.com and on the “Premios Billboard” site.

In addition, to promoting the State Farm “Celebrity Music Teacher for a Day” initiative, State Farm teen driver safety and education ambassador, singer-songwriter Gustavo Galindo will be on the red carpet encouraging attending artists to autograph guitars that will be donated to the music and arts program of Boys & Girls Club of America.

Telemundo will produce an editorial content capsule that will air during the live broadcast and also will produce a piece on “Billboard Extra” featuring the final signed instruments that speaks to the initiative.