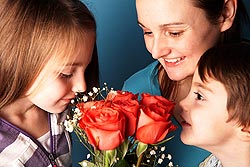 The National Retail Federation says that despite rising gas prices, Americans are eager to spoil mama this year, with the average celebrant spending $152.52 on gifts, up from $140.73 last year. About 75% intend to spend as much or more than they did last year, bringing total spending to an estimated $18.6 billion. Those in the 18-to-44 age bracket are most likely to celebrate the holiday, as are those who live in the South.

By far, the most common purchase is a greeting card, with 83% of the sample planning to buy one, followed by flowers, the choice of 66%, and some sort of pampering service, such as a spa day, a facial or a massage, selected by 58% of those included in the survey. And 54% will take mom out for a meal, making it a good day for the thousands of restaurants cooking up special Mother’s Day events and menus. (The poll was conducted by BIGResearch, and included more than 8,700 adults.)

Retailers can also expect to do well, with nearly one-third of their customers intending to buy mom a new blouse or sweater, spending $1.6 billion on clothing and accessories. And 13% say they plan to choose an electronic gift, such as tablets, digital cameras and more.

Department stores look to be big winners this year, with 36% of gift buyers headed their way, as are specialty stores (such as jewelers or electronics stores), also with 36%. About 30% will shop at one of the discount chains, while 26% plan to shop online.

The survey also says people are continually expanding their definition of the women in their lives who deserve recognition, with 65% shopping for their mom or stepmom, 22% also buying gifts for a wife, daughter (11%), grandmother (8%), sister (8%), friend (8%) or godmother (2%).