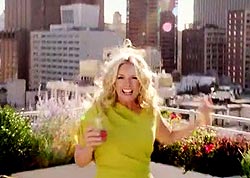 The latest launches are a Trop50 Juice with Tea line in three varieties (peach with white tea, raspberry with green tea and pear lychee with white tea); plus Trop50 Red Orange (red oranges combined with OJ). All provide a full day’s RDA of Vitamin C per eight-ounce serving. The juice/tea drinks, at 35 to 45 calories per glass, also include Vitamin E; Red Orange, with 50 calories, includes potassium.

The 2012 continuation of the “Girlfriends” campaign, launched in September 2010 with a plan calling for it to continue through 2011, obviously means that it has resonated with the core target audience: women who love juice but don’t want all the calories -- or artificial sweeteners. (This campaign, started in conjunction with Trop50’s switch from a paper carton to a plastic carafe that shows off the juices’ color, succeeded the brand’s initial campaign featuring another hot 40-something star, Kyra Sedgwick of "The Closer.")

The new Krakowski spots, like the original ones, were created by Contagious Content and directed by "Made of Honor" director Paul Weiland. The basic premise -- Krakowski dishing with friends about “life, love and looking good” (in PepsiCo’s words) -- also continues.

The latest ads include one that has Krakowski waking her Manhattan neighbors with an over-the-top rendition of “I’m Walking on Sunshine” after drinking Red Orange; and one in which she daydreams about a seductive dance with Luc Laurent (“Dancing With the Stars,” “Brothers & Sisters”) but decides her true yen is for a “refreshingly different” drink…like Trop50 Juice with Tea.

Trop50’s site features Krakowski’s image, previous TV spots, and current Facebook “buzz” topics -- seeded with questions like “Have you seen our new ads?” and “Are you a fan of our new Red Orange flavor?” -- with a ready comment click-through to the brand’s Facebook page. There, promotions of the new varieties (and click-throughs to women’s blogging sites offering praise and coupons for them) await.

More extensions can almost certainly be counted on, given Trop50’s track record. Launched in early 2009, its food/drug/mass retail sales (excluding Walmart) were $7.4 million in 2010, according to SymphonyIRI (making it that year’s sixth-largest food/beverage launch). A Mintel Oxygen report on the U.S. fruit juice/juice drinks market released in January reports Trop50 having crossed the $100-million mark.

PepsiCo reported that Trop50’s sales were up 50% in last year’s Q3 (on top of 37% growth in the previous year’s Q3). “We’re selling everything we can make” under the Trop50 brand, “and that’s a good challenge for us to meet,” PepsiCo CFO Hugh Johnston said in the same call.

While the brand’s sales are still small in comparison to the overall $6-billion-plus Tropicana brand, its full potential would appear to be far from tapped. Moreover, its success inspired Tropicana’s “add-water/raise margins” juices strategy, as described to Businessweek by PepsiCo Global Beverages chief Massimo D’Amore shortly before he retired in February.