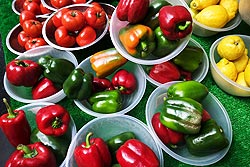 America’s passion for all things organic is re-gathering steam: The Organic Trade Association says that sales of organic products rose 9.5% in 2011 to $31.5 billion, crossing the $30 billion mark for the first time. Conventionally grown and produced food and nonfoods increased by 4.7%, allowing organic foods to boost their share of the food market from 4% to 4.2%.

Price is still an issue, it says -- but this gain is the highest growth rate the OTA has reported in three years. “The easing of the recession, consumer price inflation due to input price increases, and consumers’ increasing desire for convenience products were all factors that elevated growth for the year,” it says.  The growth of private-label organic products also helped. While organic sales jumps were in the teens and sometimes 20s during the early part of the decade, growth slowed to 5.1% in 2009 and 7.7% in 2010.

Organic food sales grew by 9.4%, with fruit and vegetables accounting for 41% of all purchases. Dairy products came in second, with 14.6%, followed by packaged and prepared foods, with 13.6%. Meat, fish and poultry is the fastest-growing of the eight food categories, up 13% from 2010, it remains the smallest, accounting for just 1.8% of all organic food sales.

The group also reports continued consumer confusion over industry definitions, such as organic, natural, non-GMO, and local. “Manufacturers that can give consumers a combination of these attributes without a price premium can hit a sweet spot,” it says, “ but when purchasers with limited budget make buying decisions, a cheaper local product often wins over a pricier imported organic option.”

Organic non-food sales, which reached $2.2 billion in 2011, rose by 11%. “The entire non-food category benefits -— and suffers -— from its small sales base and low penetration rates into the conventional mass market,” the report says. “Pet food, household products and organic flowers each account for less than $105 million in annual sales, so dramatic swings in year-over-year growth rates are not uncommon.”

Here too, it reports, definitions are a problem. “Organic certification is still a nebulous designation in many organic product categories — such as flowers and personal care — so firmer and better-communicated definitions will be required before profound growth can take hold.”