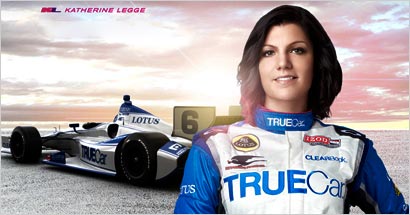 Internet consumer auto pricing and research company TrueCar, Inc. is reaching out to women, fans of auto racing, and fans of women who race autos with a project that includes backing a roster of women in different top categories, and a channel to cultivate new female racers starting from the development circuit.

TrueCar founder Scott Painter tells Marketing Daily that the "Women Empowered" initiative reflects the fact that women over-index for auto shopping, but that it also offers TrueCar an opportunity to get noticed in a space that is dominated by men, and where a lot of big brand marketing dollars go behind something of an old-boy's club of drivers.

"As a brand, we have looked very carefully at what would be most relevant for us and our audience," he says. "So as a data-driven company, when we look at the dollars sponsors put behind drivers, we find that those big names in racing come with a cost. They have a high percentage of winning, but they also come with much less impact in terms of return on investment for a brand or dollar spent. We believe we will get a much bigger impact from backing very strong drivers who may not be traditional [or expected to win]."

Painter adds that 8% of wins are by women, while 95% of marketing dollars back men. "So the ROI on women over men is positive. So, actually you aren't as likely to pick a winner if you pick a male driver. Also, at the end of the day what we stand for at TrueCar is empowering the disadvantaged buyer. So there's great symmetry between that and empowering women on the racetrack. Katherine [Legge, one of TrueCar's racers,] says when she gets behind the wheel, the car doesn't know she's a girl. That's what we try to do for people who are shopping for a vehicle."

The company also plans to have a car and sponsored driver in the IndyCar Series, and a Baja 1000 team for 2012, which will be made up entirely of women drivers.

Also on tap is a driver development program to bring young women to auto racing at the karting level and support them up to premier racing series like IndyCar, the American Le Mans Series, the X-Games and Grand Am.

As part of the promotional activity around the women racers the company is launching a VIP Sweepstakes on its Facebook platform awarding one fan and a guest a "PitCrew Experience" at an upcoming race with Legge, who drives the No. 6 TrueCar Lotus Dallara DW12. The grand prize includes two team credentials for the weekend events, hotel accommodations and roundtrip airfare.

TrueCar's new agency, Santa Monica, Calif.-based Donat/Wald + Haque, has been documenting the races and putting together background footage, which is being posted at a microsite on TrueCar.com. Painter says the company is also touting its race team via its partnership with Yahoo that puts TrueCar racing content on Yahoo Autos, Yahoo Sports and women's lifestyle channel Yahoo!Shine.

Painter says the racers will "become TrueCar spokespeople in a very real way. They will be brand ambassadors spending time meeting fans, talking about TrueCar." TrueCar has also experimented with national advertising, and Painter says in the 13 or so races this year, there will be a focus on local race markets, and potentially long-form commercials.