GroundLink Appeals To Secret Agent Inside 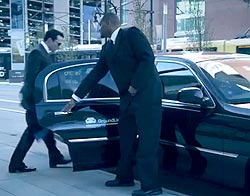 Car-service company GroundLink is looking to build national awareness by appealing to the secret agent that lives within every person who might use its service.

“We all have a secret agent on the inside,” Seth Lasser, chief marketing officer of GroundLink, tells Marketing Daily. “That’s who we’re trying to appeal to.”

Two videos, which are currently online and will begin appearing on media in local markets this summer, introduce Dan, “a financial planner, devoted husband, father and part-time secret agent for the federal government.” The first 90-second video (which has also been cut down into a television -- and Internet -- video-friendly 30-second clip) shows Dan getting dropped off at his office, entering a GroundLink car and jetting off to exotic locales to fight crime (while also consulting with clients about financial issues). The video also shows him using the company’s mobile app to order a car and track its progress, so he can escape a hail of bullets into a GroundLink car.

A second video, which will live online only, further explores Dan’s secret agent side. In the piece, three burly men abduct Dan into a windowless van. Saying one of his partners gave him up, the villains reveal their plans to dump him in the desert, surrounded by “a few hundred miles of unforgiving terrain.” During their monologue, Dan surreptitiously uses his phone to summon a car to meet him at the distant locale. When it does, the bad guys are only left to mutter, “Who the f--- is GroundLink?”

The approach, which Lasser describes as “bold, savvy and a little witty,” is meant to bring some excitement and a memorable hook to a category that doesn’t have much traction in consumers’ minds, he says. “We’re trying to create a brand in a large industry [where] there haven’t been strong brands,” he says. “When you communicate a car service, it can fall flat.”

In addition to running online and in local spot markets, the company plans on running the ads on the Captivate Network in elevators and they will “live in the social sphere,” Lasser says, teasing them on Facebook and Twitter.