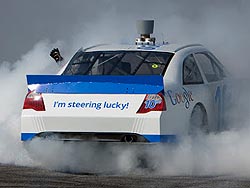 People want vehicle technology that lets them be productive. In fact, their desire for connectivity and productivity technology is -- with safety -- a leading motivator of extra-cost features on new vehicles. That bodes well for autonomous driving technology, which might be the ultimate productivity tool, as it promises, ultimately, to control a vehicle while the driver -- heaven forbid -- texts.

Google this week pitched its autonomous-car technology at the yearly SAE (Society of Automotive Engineers) World Congress in Detroit, saying that cars that drive themselves are in the horizon. The company has been testing Toyota Prius vehicles fit with Google technology that lets the vehicles drive autonomously, and is hoping that automakers pick up on the technology.

Just out from J.D. Power and Associates, the 2012 U.S. Automotive Emerging Technologies Study suggests that while safety is still -- as it has historically been -- a dominant theme in what consumers want in a vehicle, the desire for technology that lets people be connected and productive is growing. Said Mike VanNieuwkuyk, executive director of global automotive at J.D. Power, in a release: “While vehicle owners remain very interested in technologies that make their vehicle safer, they are turning their attention more and more toward features and technologies that allow them to be productive, connected and entertained while in their vehicles.”

The study -- a poll of some 17,400 vehicle owners in March -- included, among other things, a look at 23 primary technologies, each with related secondary technologies, and an analyses on device connectivity, navigation, safety and premium sound systems.

The study also looks at technologies that fall under the autonomous driving umbrella, including functions that control acceleration, braking and steering, without human interaction all the way up to Google car-like full autonomy. Consumers are still a bit wary. The firm's study found that 20% of all vehicle owners say they “definitely would” or “probably would” purchase it in their next vehicle after learning the estimated market price of $3,000. Prior to learning the price, interest for this technology was at 37%.

But VanNieuwkuyk points out that there's a psychology barrier to consumer acceptance that may supersede price premium: “Many owners are skeptical about releasing control of their vehicle and would like to see the technology proved out before they adopt it."

But the firm's Consumer Insight and Strategy Group, which tracked social media activity regarding autonomous driving, found that sentiment is generally positive for the technology's ability to enhance both safety and productivity.