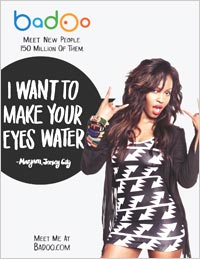 Badoo.com, a popular European social network, is making its way to U.S. shores with a new ad campaign that aims to show what New Yorkers want, rather than just what they’re doing.

“Badoo is a social network, but it’s not a social network in the way [of most other] social networks,” Jessica Powell, the company’s CMO, tells Marketing Daily. “We’re all about connecting you with new people that you can meet in the real world. When we there thinking about launching in the U.S., it was working in this offline element for us. It was really important to show how we tie things into the real world.”

The effort, from Exposure America, began in March, with what the company calls “The Badoo Project.” In late March, about 1,000 New Yorkers gathered in various locations to have their profile pictures taken by noted fashion photographers. The idea was to showcase a heightened profile picture to differentiate from other social networking sites where people use typical (and often ill-thought) profile pictures (such as girls making “kissy faces” or guys showing off their abs, Powell says).

“One of the problems all social networks have -- it’s pictures,” Powell says. “You get all of these things people do that they think makes a great profile picture, but doesn’t.”

From there, 26 people were chosen to appear in an advertising campaign, which has just begun appearing in New York City (and will run through May). The pictures are coupled with the phrase, “I want” (a signature of Badoo, much like the Facebook status update) and their personal answer.  Some of the winning phrases: “I want to wake up in a strange city.” “I want to find answers.” “I want a juicy burger with you on the side.”

“At Badoo, one of the first things you do is say what you want to do,” Powell says. “We really view ourselves as a platform where all these people can meet. You define the experience you want to have. We thought the “I want,” [phrase]  was a core part of the site. It’s all these winners telling New York what they want.”

On Monday, the company will also launch a series of digital shorts appearing  on YouTube, Facebook and Yahoo as well as Zoom, panel and taxi TVs in New York.  After reviewing the results, the company will determine how it will move the campaign to other markets, Powell says.