Social media has surpassed search, and is poised to overtake online display advertising as the No. 1 source of digital media planning and buying, according to the latest edition of a quarterly survey of U.S. advertising agencies. The survey, conducted by Strata, the agency media software and processing firm owned by Comcast, found that 69% of agency executives now consider social the “focus” of their digital ad spending -- up 32% over the past year, and now a close second behind display (71%) as the dominant digital media-buying platform in the minds of agency executives.

“The survey demonstrates that there has been a shift from search -– which has dominated the digital part of the business for the last five to 10 years -– to social,” says Strata CEO and President John Shelton.

Shelton said that view was affirmed to him this week while he was attending a technology conference of executives from small and mid-size agencies in New York City this week in which social was the main topic of discussion and nary a word was mentioned about either display or search.

“I did not hear the word ‘search’ once,” he said, “ and maybe two out of three of the vendors [presentations] and three out of four of the [agency executives’] questions were about social. Social media is absolutely their main focus right now.”

The Strata survey is based on an informal quarterly poll of its agency clients, which Shelton says is more of a cross-section of the U.S. agency scene, and therefore more representative than typical agency surveys that focus on the major agency holding companies. Strata services more than 1,000 agencies, processing more than $50 billion in media each year, and they range from shops billing $3 billion to “just under $1 million.” He said they are also geographically dispersed and include agencies based in the American heartland, as well as the major media markets.

The survey found that mobile is also gaining steam, and is now seen as the No. 1 source of digital buying among 29.9% of the agency respondents.

The iPhone continues to be the dominant device targeted in campaigns for eight straight quarters, with 75% of the executives citing it. Android came in second at 57% and the iPad was third at 44%. Interestingly, Android has fluctuated between 46% and 70% over the last eight quarters and “continues to look for stability in the mobile arena,” according to Strata.

Not surprisingly, Facebook dominates the social media mindset, with 85% of the Strata respondents citing the social network. Interestingly, Google’s Facebook overtook Twitter as the next most dominant social media platform, and Google+ has moved up as a close fourth-place consideration behind Twitter. But Strata said Facebook has reigned supreme over the span of its surveys, scoring top consideration among 80% or more of the respondents for seven of the last nine quarters that it has been conducting the survey.

Shelton said TV remains the No. 1 medium of focus among its agency clients, but that digital overall is beginning to close in on its dominance. He also noted that much of TV’s current stature has to do with the cyclical timing of the television marketplace, and especially the fact that we are in a “pre-upfront” buying period, and that we are also in a so-called quadrennial year in which the Summer Olympics and Presidential campaigns place a disproportionate share of attention on television in the ad industry.

Shelton said the agency mindset shift mirrors Strata’s own development process, which has shifted significantly toward software and data processing systems earmarked for digital, which has been true of its major rivals – Donovan Data Systems and MediaBank, which recently merged into MediaOcean, and have put most of their focus on digital media processing.

Shelton said about two-thirds of Strata’s development investments surrounding its ad agency products has been spent on digital media processing, and he says the company has experienced a 73% growth in usage of its digital products vs. only “single digit” growth of its traditional media products in the past two years. 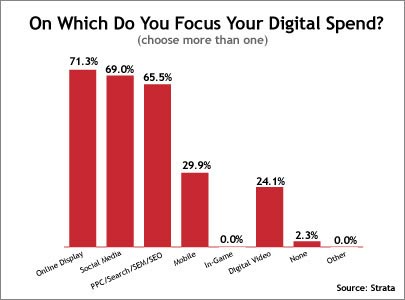