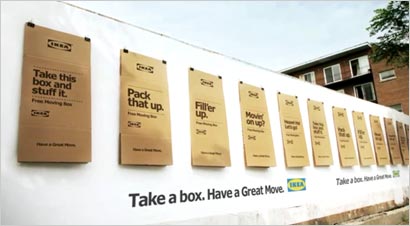 Marketing Challenge: Every July 1 long weekend in Canada, a cultural phenomenon happens. The people of Quebec move, not one by one but all at once, and it leads to all kinds of chaos. Imagine 225,00 people in a city of 1.8 million moving all at once. There isn’t enough of anything – trucks, movers, even boxes.

However, people’s dominant behavior as it related to Ikea and moving was out of sight, out of mind. When it came to moving, Ikea had never had a place, nor been top of mind. It’s only when people move in to a new place and decorate that Ikea plays a real role, and truly shines in peoples lives.

The idea was without precedent, so our objectives were simple – Increase store traffic & sales from the previous year. Any increase in traffic and sales would be considered icing on the cake – or rather Lingonberry sauce on the Swedish meatballs – as results would be incremental to the regions forecasts.

Ikea needed to help Quebecers in a way that was relevant to their situation at hand. We saw a huge opportunity to tap into the cultural fuel of urban communalism – peoples desire to return to a time when neighbor helped neighbor, and a sense of “we” versus “me” was felt around the block. In doing so, we could help move our Anxious Urbanites from a feeling of disorganized desperation to a state of composed and organized optimism.

Creative and Media Solutions: For a brand who’s purpose is to create a better everyday life for the many people, we helped make a move organized by Ikea, a move made better.

Ikea helped Quebecers make moving easier with the simple act of providing moving boxes. These weren’t just any boxes; we turned the ordinary, average dull brown cardboard box into the compelling, central media vehicle behind our campaign. We recreated what a box was and could be. Our boxes were printed with moving tips, a checklist, a helpful dinner offer at the local Ikea, and of course a great offer on new Ikea furniture for the new place. Heck, we even showed them how to turn the box into a chair when movers ran out of breath.

Boxes were posted all over town – hung flat on walls and designed to be the hardest working posters ever. When the boxes were taken, we had messaging underneath telling people to keep coming back for more. And to really rise above the Moving Day madness, we created massive 14-foot pyramids of boxes at giveaway sites around the city and at the Ikea store.

* Store traffic increased +14% from the same weekend the previous year.

These results are significant. The only variable in this year vs last was our Moving Day promotion. For Ikea, the sales increase from our ‘cardboard box’ was equivalent to building, stocking, and opening an additional 300,000 sq. foot store in that market

All winners will be presented May 23 during the 2011 EFFIE Awards gala in New York.