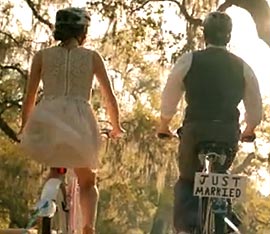 Two years after moving away from a broadcast-based marketing plan, Schwinn is looking to reach consumers through the Internet.

The effort, created by Minneapolis agency Colle + McVoy, includes a pre-roll video that looks to encompass the company’s 116-year history (as well as its relationship to bikers of all ages) in one minute.

The video begins with a young boy riding a Schwinn through his yard. The scene then cuts to the boy, older now, riding his bike with his friends, stealing glances at a pretty girl riding along with him. The boy is then seen as a young adult riding with the girl, then as a slightly older adult with the sign, “Just Married” hanging off his bike. The commercial ends with the husband and wife following their young son on his first Schwinn. ”Life’s a ride,” says a voiceover. “Enjoy it on a Schwinn.”

“The payoff kind of sums it up,” Mike Caguin, chief creative officer at the agency, tells Marketing Daily. “Some of your best memories happen on a bicycle. What kind of bicycle do you want to have them on? It’s a Schwinn.”

A second, shorter video shows the girl from the first video, leaving the pack of boys from the neighborhood behind in a bike race. The video goes on to show a bike-mounted speedometer on her bike, one of the many innovations still coming from the 116-year-old company, Caguin says. “Schwinn is an old company, but they’re innovating like crazy,” he says. “They’re doing some real innovative things in the category.”

In addition to the video, Schwinn has struck deals with media outlets such as SocialVibe (where it has created a custom bike finder) and content sponsorship on USMagazine.com (“Ride into Summer”) and Buzzfeed.com (including articles on topics such as the best biking cities in the U.S. and biking innovations). In many cases, the videos will also run in concert with display advertising for greater impact.

“Working with [Schwinn’s] media partner, Horizon Media, we said if we have more of a partnership with these online publications, we could serve up the video and flank it with display advertising,” Caguin says.