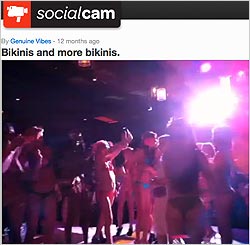 The video app Socialcam made some significant changes related to privacy in response to concerns raised by the think tank Future of Privacy Forum, the organization said on Wednesday.

The rapidly growing Socialcam has garnered 50 million Facebook users in the last three weeks, but its burgeoning popularity has also stoked privacy concerns. The major fear was that some users might have been unaware that the app shared clips they viewed with their friends -- including the types of not-safe-for-work videos that many people likely didn't want to publicize.

As with other social apps on Facebook, Socialcam spreads news about the videos people watch to their social networking friends. While the app always allowed users to disable sharing for particular clips, Socialcam automatically resumed sharing by default the next time people accessed the service, says Jules Polonetsky, co-chair and director of the Future of Privacy Forum.

But on Tuesday, Socialcam revised its program so that it no longer automatically resumes sharing. Polonetsky says that now, Socialcam will keep sharing turned off until users affirmatively reactivate the feature.

Polonetsky adds that he reached out to Socialcam earlier this month after he noticed that people in his social network were sharing material that could harm them professionally, like a racy clip of women in bikinis. "People were unaware that by watching, they were sharing," Polonetsky says.

Socialcam also now displays a pop-up that explains its sharing features and has an easy-to-find uninstall link, the Future of Privacy Forum reports.

The video app Viddy, which has now drawn more than 36 million Facebook users, also recently installed a pop-up that clarified how it shares information, the Future of Privacy Forum said on Wednesday. The organization says that it hadn't seen as much inadvertent sharing on Viddy as on Socialcam.

Representatives from Socialcam and Viddy did not respond to request for comments by press time.