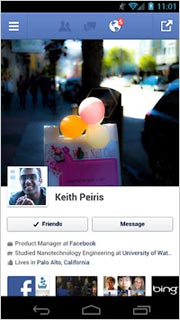 Facebook's app and Web site were used by nearly three-quarters of U.S. Android smartphone users in March, making it the most popular social-networking property on the Google platform. New data from NPD Group also finds Facebook has maintained its dominance on Android over the last six months.

Separate research released by comScore last week also found that Facebook was the top social property among Android apps and the second-most-visited site and app overall behind Google across Android, iOS and BlackBerry, with an audience of 78 million, giving it reach of 80%.

The NPD study also showed Twitter was a distant second to Facebook on Android phones, with 23% and 18% reach, respectively, in the Web and apps on Android phones. Google+ is struggling to gain traction even among Android users, with 16% reach in the Web, and between 10% and 15% reach in apps for the past nine months.

How much are Android users on Facebook? They spend 15 minutes a day, and almost 470 minutes a month. That’s about half the time users spend on a mobile game, but NPD says the fluid nature of networking apps translates into frequent dips, with Facebook users opening the app an average of six times a day. At the same time, the Facebook Web site made up 10% of all page views among Android users in March.

Facebook has acknowledged in regulatory filings leading up to its IPO that it has made hardly any money from its massive mobile audience of 500 million monthly active users. Only recently has it begun to extend advertising to its mobile presence, in the form of Sponsored Stories ads in users’ news feeds.

“Ultimately, Facebook’s mobile success rests on delivering compelling mobile app and Web experiences, and monetizing on these experiences,” said Linda Barrabee, research director, NPD Connected Intelligence.  “In order to do this, Facebook needs to ensure that monetization efforts via advertising enhance and do not disrupt the mobile social consumer experience.”