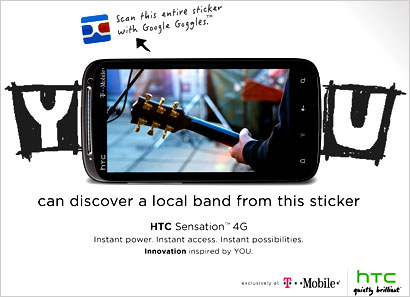 Marketing Challenge: When HTC launched its Sensation 4G superphone on T-Mobile last year, it had one problem to overcome: T-Mobile already had 4G phones on the shelf, so Sensation was late to the party. To a savvy audience that had already seen it all, we needed to make our phone about more than just the specs—it needed cool. The answer was a campaign that used Google Goggles to let people scan ads for cool new content. If the phone couldn't be a first, then the campaign could.

Our consumers weren’t just tech geeks. They were the kind of people who pride themselves on finding something first and sharing it first, all through their phones. Their phone needed to deliver everything they wanted, instantly. So we made Sensation the answer to this quest for first. And that got us thinking: What if the ad campaign did the same? What if the ad campaign promised not just information and logos, but instant gratification?.

Creative and Media Solutions: We placed ads throughout Los Angeles, San Francisco, Chicago, New York and Seattle—ads that came to life when they were scanned with Google Goggles. We worked with local artists to create original murals that were downloadable as wallpaper to phones. Print ads containing original content like video clips and mp3s of up-and-coming bands and an underground guide of your city were developed in partnership with Spin, Entertainment Weekly, IFC, and Funny or Die. Even the TV ad was scannable by Google Goggles.

Results: The result was that HTC Sensation became an icon for innovation and cutting-edged culture. The number of unique users who scanned our ads blew past expectations with over 14,000 unique users and 23,000 pieces of content scanned. The press was quick to give the campaign credit for being a “first of its kind.” Most importantly, the Sensation crowned itself as one of the best-selling HTC branded devices on T-Mobile to date.

All winners will be presented May 23 during the 2011 EFFIE Awards gala in New York.