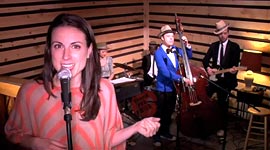 Rather than offering a traditional blanket “thank you” or a discount or promotion for reaching two million Facebook fans, AT&T will take two full days this week to celebrate a number of its fans individually … and through song.

“We felt this milestone was important because it was indicative of the fact that we’d created a relationship with our fans,” Morgan Dewan, a member of AT&T’s youth marketing team, tells Marketing Daily. “We wanted to give our fans a richer experience and do something fun.”

Over the past week, AT&T has been soliciting e-mails from its fans explaining what makes them (the fans) awesome. On May 21 and 22, AT&T will turn 500 of those emails into songs to be broadcast on the company’s Facebook page and its YouTube channel.

“We wanted to make it about them, not us,” Dewan says. “Tell us something that makes you awesome.”

The songs will be created over those two days by a group of Juilliard-trained musicians who form the YouTube music collective “cdza” (performing as AT&T’s “house band). The group will use the messaging to create personal thank you songs in one of several genres (70’s Soul, Heavy Metal, Hip Hop, etc.) chosen by the fan. In a video example of a possible song, posted at www.attthankyounotes.com, the company explains: “It will be better than this one, because it will be all yours.”

Theatrical Facebook events have become a trend for marketers looking to connect with their fans online. Last November, Norton (maker of anti-virus software) produced a 24-hour improvisational theater exhibition in which it mined fans’ public data to use as fodder for short skits.

“Facebook is becoming the de facto platform for us to talk directly with our customers,” Dewan says. “Social media gives us the ability to know what people want.”

All of which begs the question: what will AT&T do when it reaches 3 million fans? “Whatever we do, we want to make sure it’s something fun and different,” Dewan says. “Maybe we’ll let our fans decide.”