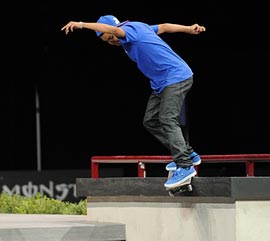 General Motors’ Chevrolet division may have found a better way than Facebook, not to mention next year's Super Bowl (at which General Motors will, reportedly, not be present), to pitch its Sonic compact to Millennials. It is official sponsor of Street League Skateboarding. The sponsorship includes custom awards and live content branded by Chevrolet. A Chevy Sonic will be awarded to both the 2012 Street League Champion and a Street League fan. Through an online contest, consumers can enter-to-win the same vehicle as the one given to the 2012 Champion.

Street League Skateboarding, which launched in 2010, is an international pro skateboarding circuit comprising 24 pros competing for the largest prize purse in history on one-of-a-kind concrete skate plazas inside world-class arenas.

Chevrolet is also title sponsor of the "Chevrolet Overdrive," a 20-minute format-free jam session featuring the Street League Pros immediately following the finals of each event. It is streamed live on Street League's -- you guessed it -- Facebook page. The best overall skater from each Chevrolet Overdrive session gets $10,000.

The Street League skateboarding competitions and activities will be carried by ESPN2, ESPN3, and Street League's Facebook Page. The organization said it will also be distributing content to nearly 200 countries via ESPN’s network.

The Chevrolet Overdrive component of the sponsorship follows the broadcasts of the events, per Chevrolet, which says that content will be online at www.streetleague.com. Chevrolet says that for the duration of the sponsorship it will have a presence on the web site, with additional content produced by Street League featuring an assortment of skateboarding stars.

The sponsorship is partly the result of Chevrolet having used Street League founder and President Rob Dyrdek in a launch video for the Sonic car. The launch campaign, "Let's Do This," focused almost entirely on web-video friendly extreme-sports type activities wherein the Sonic did things like sky dive and bungee jump. One of the stunts was having the car do a "kick flip" maneuver from one ramp to another. At the wheel was Dyrdek. The campaign culminated in a Super Bowl commercial that mosaic of all the creative from the launch campaign. The automaker says that Dyrdek's stunt was also featured in episode one of the fifth season of his "Fantasy Factory" on MTV.

"With Rob, we've found an advocate for the Chevy Brand, especially after he's taken Sonic on some of his most memorable adventures," said Kevin Mayer, director, Chevrolet Advertising, in a statement. "He's a passionate guy who pushes his bounds and we love the natural fit [with] the Street League."