Philadelphia Pulls Out The Stops For Art 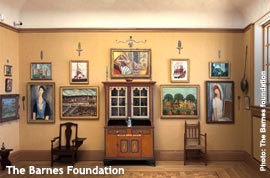 Philadelphia, probably best known as a tourist destination for American history buffs, is going to be putting fine arts on its lapel with a campaign timed to the opening of the Barnes Foundation this week. The Barnes story involves an unlikely, peril-strewn journey of some of the world's greatest works of art from a mansion in lower Merion, Penn., to a new abode in the midst of Philadelphia's museum hub, the Ben Franklin Parkway. That it's not just big news for culture vultures is partly evinced by the fact that it was front-page ink in Friday's New York Times.

The city is both touting the new location of the Barnes and using the news as an opportunity to talk about its other major museums, galleries, events, food, and culture, in a two-year campaign, "With Art Philadelphia." While the Greater Philadelphia Tourism Marketing Corp. (GPTMC) is leading the effort, it actually came about because several of the city's art organizations and museum executives decided to create an ecumenical program that would benefit all of them. Among them are the Benjamin Franklin Parkway, the City of Philadelphia, the Philadelphia Museum of Art and 13 other civic and cultural partners. (There will be more about this in a Marketing Daily followup Q&A with the president and CEO of the GPTMC, Meryl Levitz, for our annual tourism issue on May 29.)

"This is a Super Bowl moment for Philadelphia," says GPTMC spokesperson Cara Schneider. "The Barnes opening is the art story of the year, and what's so cool about it is [that] it’s not just this one building, part of it is [that] it's on the Parkway, near the Franklin Institute, the Pennsylvania Academy of the Fine Arts, and the Philadelphia Museum of Art. This has been in the planning for two years. The leaders of all three of these institutions, which have historic connections to each other, have been saying, 'How do we make it work for all of us?"

The multimillion-dollar campaign, meant to bring in new visitors beyond the city's traditional East Coast regional focus, has a large digital component that drives traffic to a new website, visitphilly.com/withart. The site has photo essays on the city's artworks and museums, but its centerpiece is a kind of virtual Ben Franklin Parkway, laid out Pinterest-style, where visitors can interactively "curate" their art and culture vacation in the city. There are also several social-media elements meant to drive buzz. The interactive Benjamin Franklin Parkway map on the site lets visitors create their Philadelphia art itinerary, among other things.

Social-buzz elements are on Facebook, Twitter, and Foodspotting. A Foursquare program launching late this month lets visitors  check in to masterpieces at Philly art museums. This summer, GPTMC will host a “Curate Your Own Experience” contest on Pinterest, wherein participants can festoon boards with Philadelphia "art weekends."

The campaign, via Red Tettemer, Buzz Marketing, MayoSeitz Media, Rockstar Entertainment and CultureWorks, will expand to include other art and culture elements beyond the traditional institutions. It has five pillars: visual arts; the Benjamin Franklin Parkway (from City Hall to the Philadelphia Museum of Art) and the Barnes Foundation's entrance there; Philadelphia gardens; art-focused colleges and arts education programs; and greater Philly's other attractions. The traditional ad plan is focused on national and regional print publications and online outlets touting art-focused days and nights in the city. The regional print strategy, running May through December focuses on Philly, New York, Washington, D.C., and Baltimore. Ads will also run in magazines like Architectural Digest, Vanity Fair, Ebony, Bon Appétit, Glamour, Vogue and Conde Nast Traveler. Ebony will carry the ads nationally, per Schneider.

"The story clearly hits art lovers, but there's such an interesting African American story connected with the Barnes and with Philadelphia," she says. As a young man, Albert C. Barnes was intrigued by black culture, partly because his mom took him to African-American camp meetings and revivals. Later, he boxed professionally to earn money for college, again opening the door to inter-racial friendships. Schneider points out that, as a collector, Dr. Barnes was among the first Americans to collect and display African art in the same galleries on the same level as modern art, and to show the direct influence of African sculpture in the modernist work of such artists as Picasso and Modigliani. Upon his death in 1951, Barnes left control of the Foundation to Lincoln University, a small, historically black university in southeastern Pennsylvania.

Schneider, who says the campaign targets both culture vultures and urban professionals in general, notes that Philadelphia has always indexed high for African American travelers. “The city has an amazing history both from the perspective of slavery and the civil rights movement, and we have spoken to this market well."