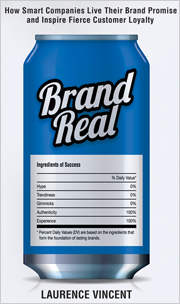 Here at Marketing Daily, we spend a lot of time dodging brand baloney. It’s not easy. We wade through overblown press releases that relentlessly use the word brand as a verb (which we don’t mind if you are actually a rancher). Often, they praise those who are busy rebranding so they can (what else?) grow the brand.

It’s a good bet that they will even refer to the brand that needs rebranding as iconic (please, look that word up.) What they mean, of course, is that their product stinks -- at least compared to someone else’s. That stink is what triggered the call to the high-priced consultant, which led to the rebranding circus, which is likely to include a new logo, a new Web site, a new campaign, some cool apps -- and of course, a social media component where consumers will say, emphatically, “Your product stinks!” And most likely, there won’t be a mention of the lingering smell.

Our favorite current example is JCPenney, which is running wonderful new ads, has a cute new logo, heroically defended its choice of the lovable Ellen DeGeneres as spokesperson, and is blowing lots of Apple-scented smoke at investors, all in the hopes that no one will notice that its stores are full of mediocre merchandise we can buy somewhere else, for less. But we digress.

That’s why we were happy to get our hands on Brand Real: How smart companies live their brand promise and inspire fierce customer loyalty (Amacom), by Laurence Vincent, head of The Brand Studio at UTA. His main premise is so simple it should be laughable, unless of course you have recently been shopping at Penney’s: Great brands succeed by creating experiences that meet or exceed the expectations set by a brand’s promise.

His contention is that there are really five types of brands. There are culture brands, such as Trader Joe’s, IBM and Southwest Airlines, a company he has worked with. There are brands that are destinations, such as ESPN and Facebook. Some brands are products (Coca-Cola) or services (Google.) And some are ingredients, such as Intel, Lycra, or Nestle’s Toll House Morsels. Powerful brands, he argues, are more than one type. Some, such as Starbucks, manage to be all five at the same time.

And while Vincent, who has also worked on such brands as Disney, MasterCard, and the National Football League, is capable of slinging a little of his own brand baloney, he draws on scholarly research, real-life examples, and his own hypotheticals to make this a good read. (He also sprinkles the text with fun little back stories, like the vichyssoise effect.)

It’s instructive, including back-to-basics on how to make your brand memorable and accessible, and consistent across all the places it touches a customer. He also focuses a lot on storytelling, tone of voice, and keeping messages simple.

Speaking of storytelling, we also read StoryBranding: Creating Standout Brands Through the Power of Story (Greenleaf Book Group Press) by Jim Signorelli, CEO of ESW Partners in Chicago. His concepts (and even the winsome little illos that go with them) may seem too simple, especially to an audience that regularly marinates its collective brain in endlessly complex market research. But that’s exactly his point: All good brands need a simple story -- something compelling and true. The basic nature of people, he reminds us, is that they don’t like being sold anything. They just don’t like you, on principle.

A compelling story is your best way to their hearts. Brand execs need to ditch their elevator pitches and mission statements, and come up with meaning, not wall-to-wall facts about features and benefits. It’s a problem he lays at the feet of the long-since-departed Rosser Reeves, and his Unique Selling Proposition. “Unfortunately,” he writes, “that is usually linked to what a brand does as opposed to what it means.” Instead, he advocates for a Unique Value Proposition.

Finally, while it won’t solve any of your marketing problems, we thought we’d take a minute to recommend Flip the Script: How to turn the tables and win in business and life, by Bill Wackermann (FreePress). While the topics are basic enough to make a nice gift for a young, and as yet unscarred, corporate pup (“Careful on Facebook people!”), it’s also got good advice for anyone who simply needs a good pep talk, and help identifying occasionally self-defeating behavior at work. In fact, for anyone who has dealt with crappy bosses, demoralizing companies, and discouraging downturns, the book is an easy-to-swallow reminder that frankly, the only who cares if you succeed at your job is you -- so you better shape up.

Extra appealing, of course, is that Wackermann learned this stuff selling ads for Conde Nast -- a place where stabbing people in their well-clad backs is part sport, part art form. Some of the advice, like spending 10 minutes a day thinking not just about what to wear but about how you’ll look to people all day long, is refreshingly shallow. And some of his business problems (“There’s an opportunity to get a project touted on “Oprah”! Should we, or shouldn’t we?”) aren’t the troubles most toiling in the trenches of marketing have to face. Wackermann, however, comes across like the bossy big brother you never had: Opinionated, a little critical (“Stop blamestorming, already!”) but ultimately in your corner.