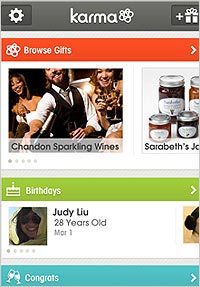 Whether in celebration of its Friday IPO or Saturday’s wedding of founder Mark Zuckerberg, Facebook has added another mobile acquisition to the pile with the purchase of the year-old social gifting company Karma. The e-commerce startup creates a curated catalog of products that mobile app and Facebook users can send directly to their friends. You pick a gift from the app-based catalog, add a card and send it via SMS, email or Facebook.

The app advertises its convenience, in that it can gift anyone from anywhere without the sender having specific shipping information on the recipient. When the gift-getter receives notice of the gifting, he or she can make color or flavor choices, even swap the gift for an alternative from the catalog or convert the gift to a charitable donation. The getter then enters the shipping info, which Karma fulfills.

The acquisition is significant in that it not only gives Facebook an interesting e-commerce revenue stream but further enhances its mobile footprint. While the newly IPO-ed company has been criticized widely for its lack of a mobile ad strategy, Facebook seems to be establishing its mobile presence mainly through acquisition. In addition to its high-profile $1 billion purchase of Instagram, Facebook has also acquired mobile media companies Lightbox, a photo-sharing app for Android, and location-based people discovery app Glancee this year.

The acquisition was announced on the Karma Web site by founders Lee Linden and Ben Lewis, who previously had developed TapJoy. “We’re thrilled to announce that Karma has been acquired by Facebook,” the two founders announced on the blog. “The service that Karma provides will continue to operate in full force. By combining the incredible passion of our community with Facebook’s platform we can delight users in new and meaningful ways. As we say … only good things will follow.”