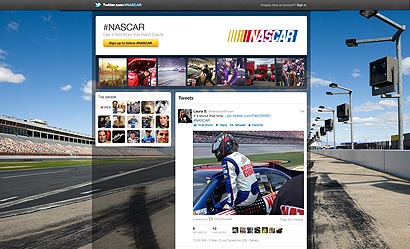 If Twitter and NASCAR go together like rubber and asphalt, it's partly because every race features every NASCAR team, so every diehard fan who can't actually be present at, say, Pocono Speedway wants the experience of being there, regardless of where they live.

Also, while quarterbacks and shortstops don't really have the freedom to post photos and tweets during games, drivers and crews do. Racer Brad Keselowski proved that during the Daytona 500 this year. Keselowski tweeted from his car a photograph he had just shot of a jet-dryer truck engulfed in flames right after having been rammed by driver Juan Pablo Montoya. Keselowski promptly got 100,000 Twitter followers. He was also tweeting his reactions to other weird stuff that happened during the race.

No surprise, then, that NASCAR has become the first sports league -- or company for that matter -- to ink a special arrangement with the social medium that gives fans a live Twitter experience.

The partnership, launching the week of June 10 around the Pocono 400, focuses on a digital program supporting live race broadcasts. During a race, when fans click on #NASCAR, search for #NASCAR on Twitter.com or visit twitter.com/#NASCAR, they will reach a Twitter platform scrolling the most relevant tweets from NASCAR drivers, families, teams, commentators, celebrities and other racing fans and personalities. Twitter.com/#NASCAR will be available starting with the Pocono Raceway race weekend and then on June 10 in conjunction with TNT’s first of six television broadcasts of the NASCAR Sprint Cup Series season.

The companies said that Twitter.com/#NASCAR will use algorithms and editorial signals to select and feature the best tweets and photos from NASCAR insiders during race weekends. Twitter’s media team will curate the tweets.

Scott Warfield, director of entertainment and marketing communications for NASCAR, tells Marketing Daily that the partnership didn’t happen overnight. "We have been having conversations with Twitter a good part of 12 months," he says. "We think it's fair to say that NASCAR is the most liberal sport when it comes to our social media guidelines. We encourage athletes to tweet until the start of the race and following the race, so we have been very proactive."

The racing association has been focusing on social media as a way to grow the sport because the dynamics of the races make each one a big event. "Frankly, NASCAR for long time has been focused on giving access to fans. Fans can walk around garages, check out the cars, and meet the drivers and crew. This is actually an extension of that; it's another way of providing access and the best complement to what's happening on TV," Warfield says.