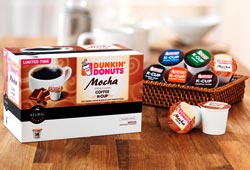 For the first time, Dunkin’ Donuts is using Twitter as the initial vehicle for a product launch.

From May 21 through May 24, Dunkin’ is running a “Mocha MaDDness Twitter Sweepstakes” to pre-promote its new Mocha K-Cup packs, which will be available for purchase for a limited time starting in June, at Dunkin’ restaurant locations.

Fans can earn a chance to win a 14-count carton of the Mocha K-Cups before they appear in Dunkin’ stores by signing up to follow @DunkinDonuts on Twitter, and tweeting a message to that handle that includes the hashtag “#MochaMaDDness” and also includes their response to the question: “Why do you want to be among the first to try the new Dunkin’ Donuts Mocha K-Cup packs?”

Entries are limited to one per person, and entrants must be U.S. citizens 18 or older.

Ten winners will be chosen at random each day during the sweeps period, for a total of 40 winners.

The sweeps is Dunkin’s way of rewarding loyal fans by alerting them to the new product in advance of its availability in Dunkin’ locations, as well as giving them a chance to win free samples.
As of early May 21, Dunkin’ had about 144,245 Twitter followers.

After the sweeps, the Mocha K-Cup packs launch will also be supported with other media/marketing.