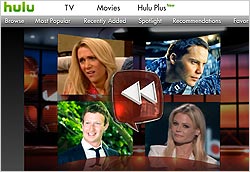 Premiering throughout the summer, the half-hour shows include " Spoilers," the movie ‘revue’ for movie lovers hosted by filmmaker and geek god Kevin Smith; "Up To Speed," Richard Linklater's travel series, and "We Got Next," a scripted comedy from producer Kenya Barris, which follows a four-man pickup basketball team.

“We want to offer exclusive shows,” Andy Forssell, SVP of content for Hulu, said. ”In an on-demand world, viewers are going to actively choose to watch TV shows that they really love.”

U.S.-exclusives include “Rev.,” “The Yard,” “Pramface,” “Derren Brown: Inside Your Mind,” “The Promise,” and “Little Mosque,” along with the second season of the sci-fi thriller, “The Booth at the End.”

The additional offerings come on the heels of Hulu’s upfront, during which it revealed a slew of performance metrics.

In February alone, U.S. consumers watched 2.5 billion videos on Hulu -- which amounted to about 1,000 videos a second -- according to Jean-Paul Colaco, SVP advertising, Hulu. Along with representing 20% of the overall online video marketplace, Hulu now claims a 40% share of the premium video market, he said.

The original Hulu service continues to ramp up users and content, while Hulu Plus -- the company’s U.S. subscription service -- surpassed 2 million paid subscribers in the first quarter of the year.

During its second-ever upfront, Hulu showed off several original projects, including “Battleground,” a drama with comedic moments set in the world of political campaigns, and filmmaker Morgan Spurlock’s “A Day in The Life."

Hulu also debuted several new products in development, including “Don’t Quit Your Daydream,” based on a documentary by Adrian Grenier that features a cast of famous musicians traveling across America in search of could-have-been musical artists, and “Flow,”  based on the life of a hardworking kid from the wrong side of the tracks who was framed for a crime he didn’t commit.

Following HBO and more recently, Netflix, Hulu broke into original programming this past January. Soon after, the online TV service ordered “Battleground,” 10 new episodes of “A Day in the Life” and “Up to Speed” -- a six-part documentary from Richard Linklater, director of “The School of Rock” and “Before Sunset.”

Original content is seen as a way to complement Hulu’s ad-supported model. While Hulu Plus exceeded the company’s expectations in 2011 -- reaching a reported 1.5 million paying subscribers -- ad revenue was lower than estimated during the second half of the year. (Overall, Hulu said it had $420 million in revenue in 2011.)

Securing its status as a natural go-to for advertisers, Hulu just committed to only bill brands and agencies for ads that viewers watch in their entirety. The 100% completion rate commitment includes all ads sold by Hulu itself, and will apply to both Hulu and Hulu Plus. In beta for several months, Zenith Media, General Mills and Horizon Media helped Hulu test the new model.

More recently, Hulu introduced its ad swap product, which allows viewers to replace existing ads for those they feel are more relevant. Since the launch of ad swap, Hulu has seen over 9 million substitutions, according to Colaco.

Despite such innovations, recent reports suggested that Hulu was considering withholding its services from non-paying TV customers. The would-be move by Hulu toward the new model -- dubbed “authentication,” because viewers would have to log in with their cable or satellite TV account number -- was reportedly behind the recent decision by Providence Equity Partners to cash out of Hulu after five years.

Hulu, for its part, has yet to address the “authentication” rumors.