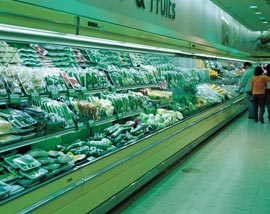 While other chains may beat it on price, Giant Food is still consumers’ overall favorite grocery store, according to a new ranking from Market Force Information.

The research, based on 6,400 shoppers around the U.S., put ShopRite in second place, followed by Walmart, Publix and Costco.  (Last year, Kroger and ShopRite came in No. 1 and 2.)

ALDI came in No. 1 for price, beating Walmart. But the survey found that price differences were somewhat less important to shoppers than in past years.

“The close scores in the pricing category demonstrate that consumers are not seeing differentiation on price as clearly as the price leaders would hope,” writes Janet Eden-Harris, Market Force’s CMO, in the report. “Low pricing is the tablestakes for grocers who must now find new ways to distinguish themselves from their competitors down the block.”

Still, price -- along with location -- continue to be the primary reasons that consumers choose their grocery store. But “operational excellence,” which includes such factors as cleanliness, courteous staff and fast checkout also matter.

When it comes to food, high-quality produce is more important to shoppers than meat. The presence of a Redbox kiosk, or the ability to rent movies, also influences shoppers. And manners really matter: The survey found that consumers rank Publix highest for courteous staff and atmosphere. Walmart, by comparison, was ranked last in courtesy (as well as in meat and produce quality), but highest for being a one-stop shopping destination.

(In a separate ranking, Millward Brown's Latest BrandZ puts Walmart in its top retail spot, knocking out Amazon. Walmart is now worth $34.4 billion, it reports, with Amazon worth $34 billion.)

In a bit of a surprise, consumers appear to see very little difference in the private-label offerings of the major chains, despite massive efforts on the part of the retailers.

Overall, 88% of those in the survey are either somewhat or very satisfied with their store, with the most satisfied among them being 70% more likely to recommend the store to another person.