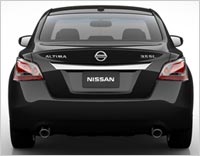 Nissan has a lot of vehicles coming in a short period of time. First -- and most important -- is the 2013 Altima; then comes the next iteration of the Pathfinder SUV, and then a totally new version of the Sentra small car.

The Altima is the key product in Nissan's spring cleaning of its vehicle lineup. The car, the 2003 version of which helped make Carlos Ghosn famous for breathing spirit into desultory brand, competes in the mid-sized car market, the biggest and most hotly contested chunk of the U.S. vehicle market. It had been traditionally dominated by two cars -- Accord and Camry -- with Altima nipping at their heels, but now it's all in flux as Hyundai's Sonata, Volkswagen's Passat, and Ford's Fusion have rattled the Japanese brands' dominance.

Now Nissan -- which has been focused on its Leaf electric car to charge the brand -- is throwing all at Altima, which had its last major revamp in 2007 for its fourth generation. While the new Altima does not introduce a profound departure, stylistically, à la Sonata or Fusion, it does offer a lot of "why didn't anyone think of this before" type advances, such as a wheel-specific tire status and filling-indicator technology; a continuously variable transmission that actually does seem continuously variable; seats based on NASA zero-gravity parameters; a host of radar technologies, and a rear camera that washes itself when it senses there's schmutz on the lens; wiper blades that automatically return to their wells and lights that automatically illuminate when the wiper blades have made four circuits (evidently in 27 states, when it rains you are required to turn on your lights). There's also a new turn-stability and auto adjusting technology whose technology I'm not qualified to discuss.

Jon Brancheau, VP marketing at Nissan's Franklin, Tenn.-based U.S. division, says the campaign -- the biggest ever for the car -- will talk about those technical advances, touting the car as a premium experience in an affordable package. The campaign will also spotlight the fact that the new Altima gets 38 mpg highway. That fuel economy note will be a big part of the larger message too -- and its importance was not lost on journalists who participated in a test-drive program this week: along the rural drive snaking through the Cumberland Plateau, the odd roadside bail of hay, a road-facing side of an old barn, and all of the turn-cue signs had a "38" painted on them.

To get the word out to everyone else, the company is also launching a 20-market grassroots effort starting in Chicago. And for the first time, Nissan is hiring regional marketing consultants -- 30 of them -- one for each of Altima's 20 key markets, per Brancheau. The consultants -- whom he said will be on a one-year-to-two-year contract, and must be inhabitants of the markets in which they are representing the automaker -- will help dealers organize Altima launch parties. The company will run 300 such parties over a 30-day period starting around June 18.

These in-market consultants will also host a total of about 20 "Innovation Sessions" in the top markets. The events will feature local innovators and innovations, a theme intended to tie into Nissan's "Innovation" mantra.

"Dealers have grown their contributions dramatically to local ad groups," says Brancheau. "We have 98% participation by dealers in every market boosting share of voice. This is the first time we've done a regional marketing focus like this."

That program and the 20-city road show will evolve as each of the five new vehicles roll out in coming months. Brancheau says Nissan will do a similar, concurrent, grassroots program around the brand's multi-year sponsorship of the Heisman Trophy Tour.

The company, per Brancheau, has the wind behind it -- as even the fourth-generation Altima has been selling pretty well considering its age."We were the number two Asian brand last year with 8.2% market share," he says. "We have had six straight years of growth, even with one of the older lineups in the industry. Now we are turning the corner with the new Altima."