'Why Vermont?' Beefs Up Mobile, Digital 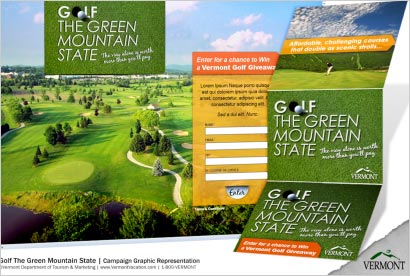 Not quite a year after Hurricane Irene pulverized the Green Mountain state, Vermont is sharpening its summer tourism efforts, with a “Why Vermont?” campaign that includes mobile, video, and a special pitch to Boston Red Sox fans.

In an effort to drive traffic to VermontVacation.com, the state has been focusing on national audiences throughout the spring, since it has found most summer vacations are planned by Memorial Day. (Those efforts include a contest to win a vacation for two at a genuine working dairy farm, as well as other prizes of … cheese.) TV ads were placed through Google DISH Network and Outside TV, and supported by 15-second digital spots. Online, it’s running display and text ads on Google and YouTube, promoting the state's plentiful hiking, biking, camping and golf opportunities. And a new mobile page features quizzes, contests and quick planning links.

For the remainder of the summer, it says it will continue to reach out to those within driving distance, focusing on family-oriented vacations aimed at those with household incomes of $75,000 or more per year. And since people in neighboring Massachusetts are the most likely to visit Vermont, the state is intensifying its partnership with the Boston Red Sox, sponsoring NESN’s First Pitch, as well as Red Sox Vermont Day at Fenway, scheduled for Aug. 5.

Online, those regional efforts will also be supported through Google Content Network/YouTube, as well as local sites. In addition to focusing on Massachusetts, especially Boston, it is also targeting New York and its suburbs, as well as Montreal.

Tourists make some 13 million annual trips to Vermont, spending an estimated $1.4 billion. In addition to extensive damage from Irene, the state has also suffered from declining participation in skiing, snowboarding and golf.