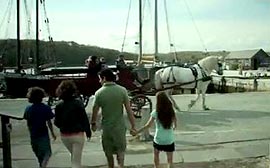 Thanks to the fiscal troubles that have beset U.S. states since the recession, in 2010, Connecticut’s official tourism budget was exactly $1.

This year, the tourism industry has a new hero: Gov. Dannel P. “Dan” Malloy, who’s made good on a 2010 election campaign promise by marshaling legislative support for a two-year, $27 million tourism branding/marketing initiative.

The state had managed to pull together a summer tourism campaign in 2010, using $1 million contributed by the private business sector plus $1.6 million in public funds and support services. But when Malloy took office in 2011, Connecticut had been literally thrown off the map: The Discover New England tourism organization had removed the state from its Web site map after Connecticut failed to pay its annual $100,000 membership dues.

Development of the positioning -- which focuses on the state’s rich history as one of the original 13 colonies, plus its history of being a cradle for innovation –- started with a challenge from Malloy. The governor asked the state’s Department of Economic and Community Development (DECD) to strive for a campaign that could emulate the huge, long-running success (or “legs”) of rival New York State’s “I Love New York” campaign.

The research showed that the state “was not on people’s radar,” Randy Fiveash, director of the state’s office of tourism, told New London, Conn.-based newspaper The Day. “We needed a rallying cry, a vocabulary.”

Starting in February, DECD helped further define the state’s key differentiators by seeking input from state residents -– the people who not only have the deepest insights about the region, but are themselves key targets for spending their vacation dollars by exploring new parts of the state. (Residents are “our most important consumers,” in the words of Connecticut DECD commissioner Catherine Smith.)

DECD ran an online “What’s Your Connecticut Story?” contest asking residents to describe the Connecticut people, places and experiences that they love most. About 200 entries were submitted, more than 20,000 people voted for their favorites, and the contest helped draw about 240,000 visits to the site, according to The Day. 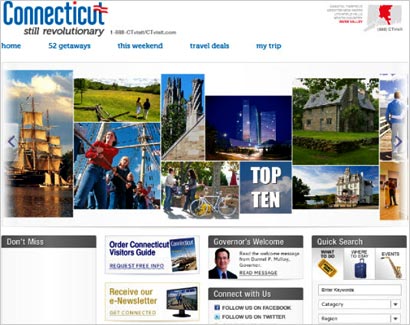 Each potential creative direction drawn from the research was reviewed and tested, Smith told NBC Connecticut.

The creative is exemplified by a two-minute trailer video on YouTube, as well as 30-second TV spots edited from the same shoots.

The videos convey Connecticut’s unique milieu by combining shots of families enjoying visits to major attractions such as historic Mystic Seaport, the nearby Mystic Aquarium and the Essex Steam Train, plus shots of Goodspeed Opera House, Gillette Castle and Southeastern Connecticut’s native American-owned casinos -- interspersed with footage of the state’s beaches and other natural beauties.

The spots are backed throughout by a song commissioned for the campaign, “Better With You,” sung by University of Connecticut student Dinelle Glaze, accompanied by the Hartford Symphony Orchestra. The two-minute video kicks off with footage of Glaze singing in front of the orchestra, immediately conveying the quality, effort (and expense for original creative/production) that went into the videos/ads.

According to CT Mirror, the state spent $500,000 on its new “revolutionary” logo and other creative, with most of the remainder going toward media buys.

To maximize their impact, the TV ads began airing during May sweeps week, on shows including “House,” “Dancing With the Stars,” “Celebrity Apprentice” and “Modern Family.”

Other efforts in the campaign highlight the state’s history of innovation, referencing its key roles in the Industrial Revolution (through Hartford’s Colt gun factory and Eli Whitney’s invention of the cotton gin near New Haven), as well as later developments such as Igor Sikorsky’s pioneering of helicopters in Stratford starting in the late 1930’s.

In announcing the branding campaign, Malloy stressed that the state has been a leader in stem-cell research, and will soon host a new center for personalized medicine from Jackson Laboratory, an international leader in cancer biology, genomics, human genetics and molecular epidemiology. In addition, he pointed out that ESPN is headquartered in Connecticut, and that NBC Sports is moving to the state.

All of which was meant to underscore that the campaign has a double-duty mission: Attracting new businesses, as well as more tourists. The campaign is “not just about tourism…it’s about getting our step back in Connecticut,” he said.

The campaign is supported by a relaunched site. In addition to featuring a link to the two-minute “Still Revolutionary” video, the site offers a “Don’t Miss” area with links to the state’s visitors’ guide, plus info about everything from its key historical and summer events, to practical tips on beach rentals, hiking trails and “green” hotels.

In addition, the site provides an enewsletter opt-in; an invitation to become a “Connecticut ambassador”; links to the state’s Facebook, Twitter and RSS feeds; specifics about key attractions and transportation logistics/directions; info about meetings/group events; and a tool to send e-postcards that feature various Connecticut scenes.

The stakes are high. In 2011, with a much-smaller marketing expenditure, Connecticut’s tourism industry generated about $11.5 billion in consumer spending and $1.15 billion in state and local taxes, as well as employing about 111,000 people (nearly 7% of the state’s total jobs).

Of course, for all of the research behind the new tourism branding/marketing initiative, only time will tell whether it can deliver the hoped-for results of generating three times the $27-million investment in tourism revenues. (Malloy noted that the “rule of thumb” is that investment in tourism marketing and support generally yields a three-to-one return.)

Real-life case studies also helped support the arguments for pumping up tourism marketing. For example, the keynote speaker at last year’s Connecticut Conference on Tourism cited research on the decline in tourism in Colorado after that state cut investment in tourism.

But all states are now competing more fiercely than ever for domestic (and in some cases, international) tourism dollars -- and, like Connecticut, many have become far savvier about their targeting and creative approaches, whatever their budget sizes.

In becoming the first state (among only 13 possible candidates) to embrace its central role in founding the nation and fighting the Revolutionary War as its core branding propositions, Connecticut believes that it has identified the Holy Grail of all effective tourism campaigns: the state’s core differentiators.

While western U.S. states might be able to trump Connecticut on sheer scenic grandeur, the Constitution State can offer great natural beauty combined with its pioneering national historic significance, the deputy commissioner of the state’s DECD, Kip Bergstrom, told The Day.

“Connecticut is not a theme park or a resort,” he said. “History is all around us.”

Malloy expressed a similar view of the state’s new positioning. “For centuries, we have been the home of literary greats, innovators and natural wonders -- an incredibly diverse array of products and talent, all right here in Connecticut," he said. “We are a beautiful state, and we are very proud of our history, even as we look toward our future. It's time we did a better job of telling that story.”

The campaign’s implementation of these themes is unquestionably sophisticated. The question is whether, however well-presented, those themes and images will resonate strongly enough to make vacationers use their now generally much-smaller vacation budget dollars in Connecticut instead of in one of the scores of other states intent on luring them into their borders.

If Connecticut can demonstrate that the campaign indeed helped snag some new businesses, as well as substantially increased tourism revenues, Malloy’s advocacy of it will pay off for the state -- as well as perhaps for his own reelection prospects. (The governor has successfully pushed many potentially unpopular fiscal cost-cutting measures, while also championing increased investment in areas such as job-creation and education.)