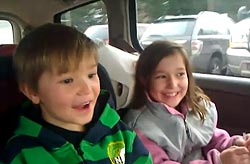 First, there was the “vacation.” Then there was the “staycation.” This summer, indoor water park resort proprietor Great Wolf Lodge will be splitting the difference, looking to catch the burgeoning trend of “nearcations.”

“The ‘nearcation’ is [a vacation] closer to home, but it’s also adding value to your trip,” Susie Storey, director of communications for Great Wolf, tells Marketing Daily. “It’s really about maximizing your time and your value and spending your time together.”

With company estimates suggesting 42 million American households with children live within 300 miles of one of the 10 Great Wolf Lodge resorts in in the U.S., the idea of a “nearcation” seemed a no-brainer, Storey says. She adds that many families are looking to take shorter (four or five-day) vacations that stretch over a long weekend, lending more appeal to getting away somewhere closer to home.

“We know families in America don’t have the time to take the big long vacations,” Storey says. “For us, this ‘nearcation’ idea isn’t just about being close to home -- it’s about being somewhere the family can be close together.”

Over the Memorial Day weekend, the AAA estimated 30.7 million Americans took driving vacations (up 0.4% over last year) and that many of those travelers would take shorter trips than in the past (642 miles versus 792 in 2011). Memorial Day Weekend travel is often used as an indicator for the entire summer travel season.

Great Wolf Lodge won’t be promoting the idea of a ‘nearcation’ in its summer marketing, Storey says. Rather, the trend falls in with the closeness and togetherness the company has been promoting for some time.

“In many ways, we’ve already been ahead of the curve,” she says. “We’re really saying we recognize families are focused on having limited time and value is very important. What we can do is provide that time to spend with your family.”