Honda, IndyCar, Mario Andretti ... And You? 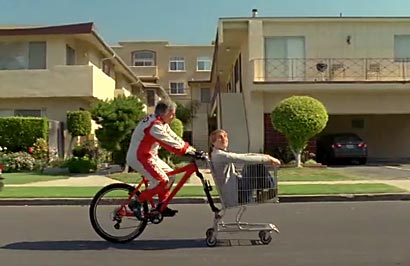 Unless you're into motorcycles or Indy, you might not think of Honda as a racing brand. But the company has been building engines quite successfully for the IndyCar Series for around nine years, has been a dominant force in the series for most of that time, and was the official Indy engine from around 2008 until last year.

Now the company is tying a campaign about its racing mojo with the upcoming Indianapolis 500 race by extending a campaign, via RPA, Honda's agency of record, that began two years ago. The effort, the "Fastest Seat In Sports," dangles a chance to ride in two-seat Indy race car driven by racing legend Mario Andretti. The new campaign includes a 60-second ad that breaks during the race on Sunday and touts Honda's consumer vehicle browsing and shopping site. Separately, Honda Performance Development, the automaker's racing-technology arm, has its own print and digital creative tied to Indy.

Honda's humorous minute-long TV spot, which launches during the Indianapolis 500 race on May 27, has a guy in his kitchen making himself a bowl of cereal. "Imagine winning something really cool," says the voiceover. A yo-yo falls out of the cereal box. "Cooler," says the V.O. Then excitement factor increases by slow increments, with the voiceover correcting each of the guy's series of rather lame daydreams: Andretti giving him a ride on a horse; in the basket of a delivery bicycle; a sedan on a neighborhood street; then in his race car, but the car is pulling a camper and they're going fishing; then the race car again but they're playing paintball. Finally it culminates in the actual prize: hot laps around an Indy Series track in the two-seat open-wheel racer.

Back to the guy's kitchen and he's browsing ShopHonda.com. The voiceover encourages viewers to visit the site to enter the “Fastest Seat in Sports” sweepstakes to win a ride at the start of an IndyCar race with Andretti. The prize is a ride in the IZOD IndyCar two-seater driven by Andretti at one of 12 races for the 2012 IndyCar season. What's different this year is that it includes the Indy 500 and two international races in Brazil and China. The company is also running a YouTube video showing the making of the ad, which will air through September, per Honda. The campaign also includes Web banners, point-of-purchase elements and social media.

The other effort -- the one by Honda Performance Development -- will also have TV components, as well as home page takeovers, banners on sites like ESPN, Fox Sports and Sports Illustrated and print ads. That campaign, also via RPA, drives traffic to HondaRacing.com.