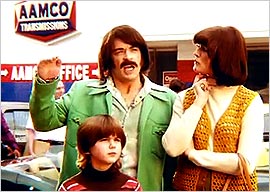 Transmission service chain AAMCO is extending its “We Hear You” campaign to encompass the company’s 50th anniversary this year. The campaign, where an AAMCO customer comes in and tries to recreate the sounds of his troubled powertrain using only his voice box, has a noise-making AAMCO customer doing his thing through the decades. A second ad contrasts AAMCO trustworthiness as a go-to place for all engine needs with vile people you'd never trust for anything.

The anniversary spot, the third iteration of “We Hear You,” follows a family from 1963 through today, in time-appropriate ages, hairstyles and apparel as they visit AAMCO dealerships. The couple vocalizes noises, hoping to obtain an expert diagnosis from the technicians. In the last image, where he's a middle-aged guy today, the punch line is he's just trying to clear his throat.

In the second ad, the images leading up to a woman walking into an AAMCO store with implicit trust that the shop will be able to fix anything, are pretty grodie: a woman approaches her cubicle to find a guy sitting there, impassively licking her computer keyboard. Another cringe-worthy moment asks: "Would you trust this guy to hug your mom?" The guy -- corpulent, hirsute, dissipated, and half-naked -- hugs a mom. Then, there's "would you trust anyone to give you a massage," as a professional masked wrestler leaps from a credenza onto the "patient's" back.

Says Jack Bachinsky, VP marketing: "We decided to extend [“We Hear You,”] and this is the perfect next-generation ad." He says the “Trust” campaign reflects the importance of the issue based on consumer research. "We have a long history of creating humorous ads going back to campaigns we have done in the past like one using Zsa Zsa Gabor, or one where monkeys are beating on a transmission. It plays to our history."

Bachinsky says the media buy is all spot, with regional ad coops independently handling buys in all major markets. "It's a staggered release, so we recommended that they run the 50th anniversary first to align with an online sweepstakes we are doing, and then run 'Trust' in the fall."

The digital strategy, in addition to search-engine marketing and optimization in each market, includes a tie-in with Facebook, and a sweepstakes around the 50th anniversary involving a giveaway of either a brand new 2013 Corvette, or a 1963 split-window Corvette. The company has also parented with the Military Order of the Purple Heart, which will select 50 families of injured vets in 50 states who cannot afford car repairs. Each will get up to $7,000 in service.