Ford And Yahoo Home In On Electric Focus 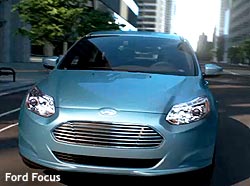 The spotlight is on Ford's new Focus Electric car, which is the automaker’s first vehicle in a tiny-but-growing segment dominated by Nissan's Leaf.

The weekly online reality competition features two-person teams competing against each other in a series of challenges. In the inaugural show, Arquette guides contestants through challenges in Los Angeles. Later shows have other actors and celebrities doing likewise in their respective hometowns.

In addition to being about the teams’ efforts to complete challenges, the episodes spotlight each town. The winning teams in each city will move on to participate in the finale event in Los Angeles, where they will compete with teams from other regions for the chance to win a Ford Focus Electric. The finale is on Aug. 7.

Matt VanDyke, director of U.S. marketing communications for Ford, said in a statement that the reliance on digital evinces the company's long-term goal of moving media online. "The electric vehicle market will grow over time, so we electrified our popular small-car platform rather than creating a one-off vehicle, and now we can use a targeted online campaign instead of a big-budget advertisement."

Rather than Ford touting the Focus Electric in ads, the car is integrated in the series, and its features are revealed because the teams have to use the car's technical capabilities to solve challenges, according to the company.

Each team will use Ford's SYNC communications platform and the MyFord Touch telematics to figure out where they are and how to get where they are supposed to go. The in-car interfaces will be the source of video, text and audio clues to their respective challenges. They will use hands-free calling when they have to make calls.

"With at least 8 out of 10 Internet users now watching online video, this is the perfect time for Yahoo and Ford to launch ‘Plugged In,'" says Erin McPherson, VP and head of video at Yahoo, in the release. "We know from our insights and data that our audience is passionate about celebrity-related content and travel content, and we combined those insights with Ford's brand goals for a truly engaging program."