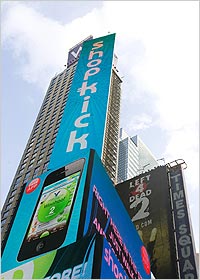 Target says it is taking its relationship with Shopkick national, and will now accept the app at all its stores. Shopkick allows users to earn points as they shop, redeeming them for rewards and discounts at participating stores, nationwide.

The Minneapolis-based retailer had been testing the app in seven cities, and says in its release that the pilot project received “rave reviews.” Other retailers are already partnering with Shopkick, including Best Buy, Macy’s, Old Navy and Toys R Us; Target is its largest.

The free app, available for both iPhone and Android,  rewards shoppers with “kicks” just for walking in the store, and in some cases, simply scanning items, without purchase, can also generate points. Kicks can then be redeemed for Target gift cards, Facebook credits, dining gift certificates, iTunes downloads, even charitable donations. Users, who can link the app to their Visa card, also receive special in-store deals including coupons and discounts.

Shopkick claims to be largest location-based shopping app in the world, and has partnered with Procter & Gamble’s Futureworks to develop functions it says benefit consumers, retailers, and brands. (P&G has been embedded in the company’s Palo Alto, Calif. offices for the past 18 months.) It competes with such companies as Foursquare, Google and Groupon.

Retailers are keenly aware of the growing threat posed by m-commerce, with Forrester predicting it will reach $10 billion this year. The Shopkick announcement is just one more way Target is aiming to leverage mobile technology inside its stores: It was the first company to introduce a nationwide mobile couponing effort, enabling every Target checkout to scan barcodes from shoppers’ phones.