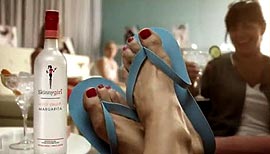 Skinnygirl Cocktails is looking to build on its considerable momentum with new brand extensions and a new campaign dubbed “Drink Like a Lady.”

The multimillion-dollar campaign, spanning television, print and digital, represents a tripling of the brand’s 2011 marketing investment, according to parent Beam Inc.

The creative, from the Walton Isaacson agency, celebrates women “making their own rules” through a tongue-in-cheek approach to modern social etiquette.

The first TV spot, for example, shows a prim woman from the 50’s stating that “a lady always wears sensible shoes,” followed by a cut to a scene of modern young women enjoying Skinnygirl at an informal gathering where “sensible shoes” translate to flip-flops.

Women “know what they want…and the art of socializing should be on their own terms,” says Skinnygirls Cocktails founder Bethenny Frankel. Both the brand and the new campaign are about “reinventing the art of cocktailing,” she adds.

The campaign also promotes the brand’s new and expanded products, including ready-to-mix Skinnygirl Vodka with Natural Flavors, Skinnygirl The Wine Collection, and new Piña Colada and White Peach Margarita flavors of its ready-to-serve cocktails. “Skinnygirl now has all of the wine, vodka and ready-to-serve options you need, without the extra calories you don’t,” says the first TV ad’s voiceover.

The TV spots will run in prime time through the summer on cable channels including Bravo, HGTV, Food Network and E!. Print and digital elements will continue throughout 2012. Magazines in the schedule include Cosmopolitan, Food Network Magazine, Marie Claire and Redbook. Paid digital ads on sites including Weight Watchers, Pandora, Glo, Meebo and Hulu will complement the brand’s social media strategy on Facebook, Twitter and YouTube.

Last year, Skinnygirl Cocktails had the fastest volume growth, in percentage terms, among all spirits brands, according to the SpiritsTAB Report from Technomic’s Adult Beverage Resource Group. The brand sold 586,000 9-liter cases, a 388.3% jump over 2010’s volume.