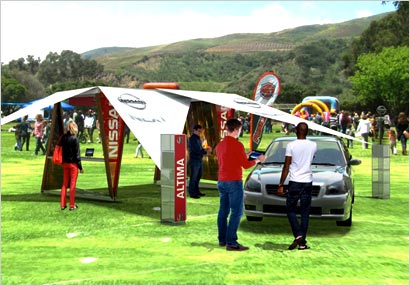 Nissan has finished the second year as automotive sponsor of the Amgen Tour of California. The automaker used the event to put the spotlight on several vehicles, but principally the new Altima mid-sized sedan, which was the pace car for the race.

Nissan Next will bring the Altima, the new Pathfinder, forthcoming Sentra and other vehicles to 20 major U.S. markets with a “Nissan Next Innovation Center” experience that include a test-drive opportunity, rich-media exhibits, technology displays showing the car's engineering innovations, social-media elements, and TED-style presentations and panels.

Q: What did the Tour of California look like in terms of the turnout? Does it seem to be getting bigger each year?

A: I think so. They have had more coverage on NBC, so that's helping on a national perspective. The crowds to me seemed really big. We've been there for three years, and on Sunday wrapping up in L.A. it was crazy because that morning we had the bike race and immediately after it ended the hockey game -- the Kings game -- took place at same venue, and that night there was the Clippers game. So downtown L.A. was crazy for the entire day.

Q: You are doing it again next year? What vehicles got the focus?

A: We did a two-year deal with the Tour of California. It's a combination of three or four vehicles that were popular. A GTR wrapped in team colors, so that was cool, and a lot of people taking photos of the car. And since we had the Altima as pace car that got a lot of visibility too. For the cycling crowds even having the MV's (Nissan's new utility van) out there got a lot of attention, especially for organizations and other teams curious about the vehicle's functionality. I think just getting that story out about functionality and that we are selling it is still news to people.

Q: What's the genesis of the Nissan Next tour?

A: It was a couple of things that got us moving in this direction. One is we have done a couple of tours with the Leaf, called "Drive Electric" tours the last two years and we felt that was pretty successful in telling the Leaf story and giving people the first opportunity to try it. And then we really started talking about this last summer, the Year of Innovation with all these launches coming up, that we needed to do something along those lines but maybe on a bigger scale that would impact the entire Nissan lineup. That was sort of the genesis of this Nissan Next program, which will launch in the next three weeks. The whole idea came about from the Leaf Tour and the Year of Innovation and the need to tell the portfolio story for innovation. That's what we are trying to accomplish with this tour.

Q: A little about the 30 in-market consultants you are hiring for Nissan's 20 key markets. So they have to actually live in those markets already, right?

A: Correct. There are two key components. One is we are going to hire these 30 individuals who will help dealers in local markets to launch first the Altima and then we will have the Nissan Next touring property, a bigger tour experience along the lines of the Leaf Tour that will go city to city with a big ride-and-drive component.  The consultants will be involved in that in each town. In the L.A. market, for instance, there are three consultants. When the touring property is there they will help us with that. Otherwise, they will help the local dealer body with the new Altima.

Q: Why do you need these consultants for this?

A: A lot has changed with the field organization over time. Because of the importance of Altima, our largest-volume model, we needed people locally to engage with the regional office of the dealers and help them with launch parties and events in the local community and so that's how we came up with the concept.

Q: So they are like the liaison with Nissan corporate?

A: Right. So our regular field office has lots of different responsibilities, and this will just give them some arms and legs to make local promotions more effective.

Q: What kinds of people are you looking for to fill these roles?

A: We are looking for people that have auto experience, are passionate about our industry and also have experience doing events and promotions. We aren't relocating people and want people with social marketing savvy so they can use Twitter, Facebook, etc. to help us promote these products.

Q: They don't have to have an auto background?

A: Not necessarily, but that's one thing we are looking for: do they have experience working with dealers or a real passion for cars, so that we know they will be connected and passionate about what we are asking them to do.

We have literally thousands apply for this, and we are actively in the hiring process; we are feverishly working on it right now.

Q: Who's handling it?

A: GMR is the company that is our vendor for this whole project, both for hiring the 30 in-market consultants, and for handling the tour as well. We are doing phone interviews right now with the candidates. GMR is meeting them in person.

Q: Are you looking for younger people?

A: That is not really one of the determinants. It's more based on passion for the industry, and hopefully they have some experience in the business, plus events and promotions too, since event planning will be a big part of the role. We don't want to spend the next two months training them how to do that -- they have to have that already in the skill set.

Q: Do they have a marketing budget?

A: They do have a small budget for activation of the events and promotions.

Q: What's the next big bike race Nissan is involved in?

A: There's the U.S. Pro Championship in Greenville, S.C. this weekend, so our team will be there. And then the next big race will be Tour of Utah and Tour of Colorado in August, and the Tour de France is the next really big race and that's in June.