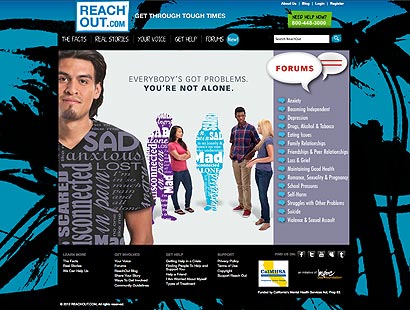 The California Mental Health Services Authority is launching a social media campaign aimed at dispelling the stigma and discrimination experienced by residents with mental illness.

Research, feedback from medical and social service experts, guidance by communications specialists and input from consumers of services, were evaluated in preparation for the launch, says Wayne Clark, Monterey County's director of behavior health and board president of CalMHSA.

May was selected for the campaign’s launch because it is Mental Health Month, initiated nationally in 1949 to raise awareness of the impact of mental health issues. The consequences of mental illness for the individual and society can be staggering, including unnecessary disability, unemployment, substance abuse, homelessness, inappropriate incarceration, even suicide, Clark says.

The campaign aims to dispel the misconceptions many Californians have about people living with mental illness, since misunderstandings and misconceptions can prevent people from getting help.

The target is Californians who are transitioning from their mid-teens into their mid-20s and adulthood. It is one of three age-specific media campaigns targeting California's diverse audiences throughout the lifespan. All three media campaigns will make use of online, radio, public relations and social media.

Later media efforts will focus on 9- to 13-year-olds to stop stigma before it starts by increasing awareness and understanding of mental health issues, and on adults ages 25 and older who make decisions around housing, jobs and relationships and influence how people affected by mental health challenges are socially included, valued, and supported.

The initial phase of the campaign will link young people to tools and resources that can help at ReachOutHere.com. The site  offers visitors a safe, anonymous, peer-to-peer experience where they can discuss a range of social and mental health and health-related issues and receive support when going through tough times.

ReachOutHere.com forums and other resources on ReachOut.com will serve as how-to guides for problems like anxiety, depression, becoming independent and dealing with school pressure. These resources promote health and well-being by de-stigmatizing mental illness, encouraging help-seeking, increasing social connectivity and building resilience.

CalMHSA is a joint powers authority of county governments that seeks improvement of mental health outcomes for individuals, families and communities. It is funded by the Mental Health Services Act (MHSA), Proposition 63, passed by California voters in November 2004 and responsible for a major shift in the way California provides mental health services, which is away from crisis care and costly institutionalization and more toward an emphasis on prevention and early intervention.

The anti-stigma and discrimination campaign is one of several prevention and early intervention initiatives funded by the MHSA and administered by CalMHSA. The other two focus on suicide prevention and student mental health needs.

A new study conducted by Field Research shows the majority of California adults are unsure about whether treatment is possible and whether people with mental illness are dangerous.

According to the research, Californians are accepting of people with mental illness as friends, family members, students and patients in health care settings. They are much less accepting of them as job applicants, tenants, next-door-neighbors and coworkers.

Those in transition from youth to adulthood are especially vulnerable to stigma and discrimination, because they are heavily influenced by peer opinion and media messages and because 75% of all lifetime mental health disorders start by age 24.