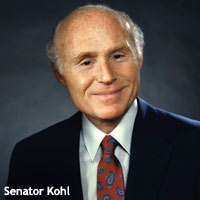 "It is crucial that your agencies examine the competitive implications of these marketing agreements," Sen. Herb Kohl (D-Wisc.) wrote in a letter to the Federal Communications Commission and the Department of Justice. "It is particularly important that you ensure both that consumers will reap the benefits of vigorously competing wireless carriers."

Even though the authorities haven't signed off on the spectrum transfer, Verizon and Comcast recently started co-marketing their services in Seattle, Portland and the San Francisco area. The companies are offering a quadruple-play deal that allows consumers who sign up for Comcast's Xfinity TV bundle and Verizon's mobile phone service to receive a $300 prepaid Visa debit card.

The spectrum deal has drawn criticism from consumer advocates, as well as Verizon's rivals like Sprint and T-Mobile. The opponents contend that the deal can harm consumers, especially if Verizon and the cable companies stop competing to offer faster or cheaper broadband service. Verizon's recent decision to stop expanding its FiOS network is adding fuel to that fear.

Kohl shares some of those concerns. "Spectrum acquisitions can be a strategic tool employed by dominant wireless carriers to entrench their market position and suppress competition," he states in his letter. "There is real concern these agreements transform Verizon and the cable companies from fierce competitors into business partners because they lessen the incentive for Verizon and the cable companies to compete aggressively against the other, particularly in the markets where Verizon has deployed FiOS."

The FCC currently is seeking information about the proposed deal, but has not yet stated its position on whether the plan should go through.

Verizon recently offered to sell some spectrum it currently controls in exchange for regulatory approval. That offer sparked new inquiries by the FCC, which last week asked Verizon to describe why its offer to sell spectrum should be contingent on approval of its deal with cable companies.

But Net Competition, a group that includes cable companies and telecoms, says the Verizon-cable deal will increase competition. "It puts unused spectrum to work," the organization stated. "And it eliminates no competitor or competition."