And The Award For Best Social Media Extensions Goes To MTV

The word “TV” still dominates its name and identity, but beginning today, MTV will introduce a variety of so-called “second screen” experiences leading up to and running through its annual “MTV Movie Awards” on June 3 that may cause some users, er viewers, to question which screen is their dominant one. Not surprisingly, social media will be at the core of the new digital screen experiences, including a new movie awards category, dubbed “Real Hero,” that will be chosen dynamically in real-time by fans tweeting in to special Twitter hashtags.

Twitter, which MTV has been working with for several years, will also play center stage on the second screen, as a way to augment viewers’ first-screen experiences. The awards show will also utilize a new, reimaged version of MTV’s Twitter Tracker, which beginning today will enable users to “visualize” key moments leading up to and running through the awards telecast.

With an emphasis on socialization, MTV will also utilize its Facebook presence to post “memorable moments, winners and other outrageous activity” in real-time.

The initiatives are all part of an ongoing progression that MTV digital executives dub “storytelling without borders,” which is designed to create greater “transparency,” and to give viewers and users a “’peek behind the curtain” during some of MTV’s highest-profile events.

“The main event is still watching the live TV broadcast,” explains Colin Helms, senior vice president-digital at MTV, “but we know people multitask and we’ve created an experience to sort of track that.”

The goal, he explains, is to “build and amplify” on the television experience by enabling viewers to have direct access to special content leading up to and running through the telecast and to encourage them to share it.

Twitter and Facebook may be the biggest elements, but the effort also includes components involving Instagram, Foursquare and Tumblr, each of which enable users to access and share elements of the awards show -– which along with its Video Music Awards is one of MTV’s two big “tent pole” events of the year.

The social voting via Twitter, in particular, represents a new paradigm for a major TV event like the movie awards, says Michael Scogin, vice president of mobile at MTV, because he says it is the first time any major awards show will enable users to see -- and presumably influence -- voting continuously in real-time.

“We’re going to be completely transparent about it in real-time,” he says.

The social media extensions, which are being sponsored by Sprint, are intended to impact the way people experience the MTV event before, during and after the awards telecast, and are expected to help boost overall viewer engagement -- and ideally, Nielsen ratings.

“At the end of the day, we think people still like event television and storytelling, and the big screen is still the best place to do that,” Helms explains, adding that the extensions are all part of a progression that began by dabbling with Twitter a few years ago, and that MTV is simply adapting to how its audience wants to experience television.

In fact, many of these same social media components will become regular, mainstay elements of ongoing series, including the new season of MTV’s “Teen Wolf,” which debuts after the movie awards.

The problem, adds Scogin, may not be what to do with social media, so much as it may be what not to do. The proliferation of new and emerging social media platforms is expanding so rapidly, he says, that TV programming executives and viewers alike need to winnow the options down to key ones that matter. And while Twitter and Facebook will be the primary components for MTV, it is enabling users to create their own real-time animated images via Instagram, and will enable them to check-in via Foursquare, and will also incorporate Tumblr. That’s it for now, he says, but the MTV digital team will continue to vet and explore other new ways of involving their viewers by breaking down the borders surrounding their linear TV viewing experiences. 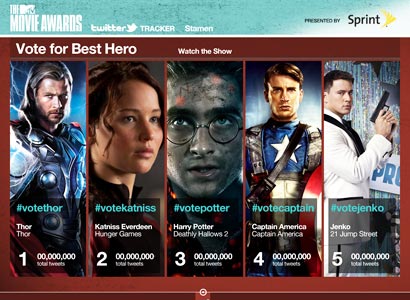