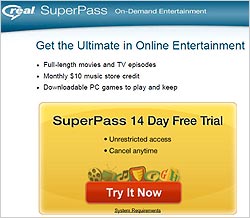 RealNetworks has agreed to pay $2.4 million to settle allegations by the Washington Attorney General that it deceived Web users by offering "free" trials of Rhapsody and other products, but enrolled them in paid subscription plans.

It also promised to make it easier for Web users to cancel subscriptions, and to refrain from obtaining users' consent to charge their credit cards by presenting people with pre-checked boxes. The company also promised to comply with the federal Restore Online Shoppers' Confidence Act, a measure spearheaded by Sen. Jay Rockefeller (D-W. Va.) that aims to stop Web companies from tricking consumers into registering for paid subscriptions.

That law, enacted in December 2010, requires marketers to "clearly and conspicuously" disclose all material terms before asking Web users for their credit or debit card information. The federal statute also requires marketers to provide simple mechanisms for Web users to cancel recurring charges. Violations are considered unfair and deceptive practices, subject to sanction by the Federal Trade Commission and state attorneys general.

The Washington Attorney General's settlement with RealNetworks stems from allegations that the company used aggressive tactics in signing people up for subscriptions that ranged from $15 to $20 a month. For example, when consumers purchased music from the RealPlayer store, the company presented them with a pre-checked box that automatically enrolled them in a trial subscription to Rhapsody, the complaint alleges. "Unless the consumer deliberately unchecked the box, he or she would be billed for the Rhapsody subscription at the conclusion of the trial period."

It also charged that RealNetworks allegedly made it hard for consumers to cancel their subscriptions; in some cases, the company's customer service department would tell people that their accounts couldn't be found, according to the complaint.

In a statement, RealNetworks said it revised its marketing tactics before the lawsuit was filed. "While we disagree with the complaint filed by the Washington Attorney General, we acknowledge that some aspects of RealNetworks' e-commerce practices were not what our customers expected of us," the company said. "The practices at the heart of the issue were discontinued years ago."

RealNetworks will offer refunds to consumers totalling $2 million and will pay the Attorney General's office $400,000 in legal fees.