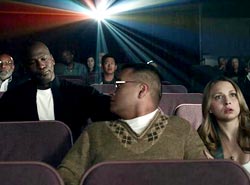 Using the ever-unflappable Michael Jordan as its spokesperson, Hanes is introducing tagless underwear for men with a new TV campaign.

A spokesperson for the company, which eliminated tags in its undershirts way back in in 2002, says the ads are scheduled to run on high-profile entertainment and sports programming, including the NBA playoffs.

It says it introduced the tagless undies when consumer research showed that men were hankering for tagless briefs, boxers and shorts, too, and that the labels tend to chafe and annoy them.

So in the spots, the tags take on annoying personas. Jordan, who has been appearing in Hanes ads for 20 years, steps in to rescue men from these relentlessly irritating tags. In one, a mild-mannered cubicle dweller is trying to get some work done, constantly interrupted by the banter of his tag. Jordan yanks it out and runs it through the shredder.

In another, the tag gives gratuitous (and insulting) grilling advice to its owner, before Jordan throws it into the flames. And in a third, a guy and his date are in a theater, trying to watch a horror movie. But the man's undershirt tag keeps yapping, giving away the plot. Jordan pulls the tag out, and shoots it into a cup of soda.
Each spot ends with a tagline that simply states: "Tags are annoying. So we got rid of them."

Each spot is set to air on high-profile sports programming, such as the Western Conference NBA Playoffs and the MLB (TNT, ESPN, MLB Network etc.), as well as entertainment networks such as TBS, Spike and SyFy," the spokesperson says.

Hanes, which claims to be America's No. 1 Apparel Brand, competes with Fruit of the Loom, and is not the first to the tagless party. Fruit of the Loom released a hilarious spot, “You can't overlove your underwear” -- created by the Richards Group -- back in 2010. In it, the apple guy soulfully salutes the brand: “There’s no labels hanging anywhere.”