The Globetrotters Get Big China Sponsorship 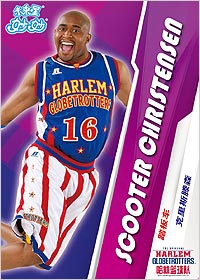 At one time the National Basketball Association backed the globetrotting ambitions of the Harlem Globetrotters. Now the Globetrotters have gotten their own sponsorship deals. And the one they have just inked for a huge market outside the U.S. is their biggest ever.

The trick team, which invented the unlikely and uniquely American marriage of comedy and basketball, is this year being sponsored by the Inner Mongolia Mengniu Dairy Industry. The deal, in which Mengniu will back a series of Globetrotter tours in the country, is the largest in the franchise's history. And it may well culminate in the Harlem Globetrotter's first-ever Chinese player -- as the team is doing its draft this month, and will be looking at China for new talent.

The organization says the partnership includes marketing activation on various year-round activities, including school clinics, promotional visits, and in-game activation. This is the fourth time in the past three years that the Globetrotters are lining up Mainland China tours. The team will do six visits in China this year, per the organization. The team also opened a satellite office there last year.

The team’s collaboration with the NBA began in 2008, as part of the NBA’s efforts to make basketball popular. The league made the Globetrotters an unofficial basketball ambassador to the world. As part of that deal, the NBA -- which has offices in Beijing, Hong Kong, Istanbul, London, Madrid, Mexico City, Paris, Shanghai, Seoul, Taipei, Tokyo and Toronto -- helped the Phoenix-based Globetrotters organize international events and games in different markets, especially China, where the Globetrotters had toured in 2004.