MTV Digital Series Is A Teen Wolf In Transmedia Clothing 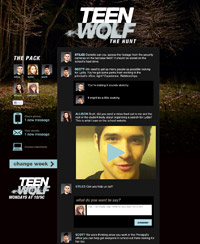 In an important test of a new interactive storytelling experience, MTV this week launched a new series called “Teen Wolf.” That’s right -- new. While the second season of the MTV series by that name debuted Sunday night following its telecast of the 2012 MTV Movie Awards, a new, parallel, interactive version of the series debuted Monday on, well, a variety of screens -- just not television ones.

The main platforms for the interactive “Teen Wolf” series are fans’ own personal screens -- whether they are PC, tablet or handheld -- and the primary distribution engine for it is Facebook, where the series has already amassed 1.5 million fans, making it one of the most-liked MTV programs of any kind. The number of Facebook fans is up about 50% from when the series’ 2011 season ended, and the growth on the social network, says Kristin Frank, is testament to the fact that “Fans don’t stop being fans just because seasons end, and episodes end.”

Frank, who is senior vice president-general manager of MTV and VH1 Digital, calls the concept “storytelling without borders,” which is her way of describing what others in the business have been using buzzwords like “transmedia” or cross-platform storytelling to define.

The idea is probably as old as storytelling itself, but the media industry began exploring it in earnest in the early 1990s when digital interactive media –- at first, kiosks, then CD-roms, and ultimately networked computing -- but to date has been largely experimental and has not generated much fruit in terms of scaling audiences for programmers and advertisers. But MTV’s Frank says both the media environment and the expectations of fans have changed markedly in the past couple of years, and the time is right for a new form of storytelling that runs “parallel” to a regular TV series like MTV’s “Teen Wolf.”

The benefits, she says, are for the TV program (heightened buzz and promotion), the advertiser (oodles of brand integration opportunities), but mostly for the fans themselves, because unlike any series before, the digital version of the “Teen Wolf” series will enable users to be immersed in a way that allows them to experience the stories unlike anyone else, and on their own time, and in their own level of engagement.

“You can have a very different experience than your friends can,” she says, explaining the logic behind the interactive fiction, which utilizes elements of social media, game mechanics, and multiplatform narratives that weave in and out, and go off on their own from the mainstay TV series.

The effort is possible, Frank says, because the show’s creators and writers are also working on the interactive components and see it as a genuine extension of the TV series’ primary story arc, but on a more personalized level.

Facebook users who are fans of the series will receive direct feeds on their walls, in their message boxes, as well as SMS text messages to their mobile phones that invite them to follow secondary narratives along. Most of the content is experienced in text narratives, although sometimes they link to videos or other multimedia content that users can determine how much time to spend with -- whether they go deeper or to other levels, and of course, whether they share them with other friends.

Each week, digital fans of the series will receive cues to experience between three and upwards of seven “scenes” of related content, according to MTV Executive Producer Tom Akel, who is overseeing the digital version of the series. Akel says viewers must experience at least three “critical scenes” that are integral to following the narrative, but that they have the flexibility of experiencing them superficially (about five minutes each) or more deeply (upwards of a half hour). It’s all based on their own self-interest and motivation, he says, making it a truly interactive fiction.

Frank says the goal is first and foremost to service fans who feel a “radical intimacy” with TV shows and their characters, and want ancillary ways of experiencing them, but the payoff could be for the show’s producers and advertisers by adding to an already fervent fan base.

If the digital series is successful, Frank says MTV will try it with similar long-form content in the future.

“We’ve done a good job with our tentpole events,” she says, referring to the interactive storytelling enhancements MTV has developed around big events such as last weekend’s MTV Movie Awards. “This takes it to the next level. At the end of the day, good storytelling is good storytelling. This will only enhance it.”