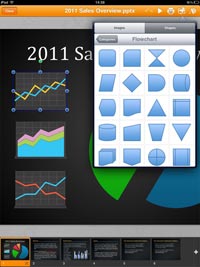 Google made a revealing acquisition this week that addresses some of the company’s weaknesses against competitors Microsoft and Facebook. Its purchase of longtime mobile productivity suite Quickoffice gives the search giant a highly evolved set of apps aimed at the enterprise and professionals. Quickoffice has been providing services for mobile users since before the arrival of smartphones, which provided tools that paralleled Microsoft Office.

The deal comes in anticipation of Microsoft extending its legendary Office suite to a range of devices later this year. According to reports, a version of Office is in development for the iPad. Google has experimented with a range of cloud-based productivity solutions, especially Google Docs. The extension of these otherwise popular Web apps services has been uneven, however. In a statement at the Google Blog, the company welcomes the Quickoffice team and says “we’ll be working on bringing their powerful technology to our Apps product suite.”

It is unclear whether Quickoffice will replace some of Google’s persistent attempts to compete with Microsoft on the productivity front. The functionality and mobile integration of Google Docs has been patchwork at best. Some aspects of the Web apps are designed for collaborative works and others focus on cloud-based document storage and downloading. Microsoft itself has been enhancing its cloud-based offerings for Office users with Windows Live and Office 365 cloud-based services. But this 800-pound gorilla in the business productivity space has itself been slow to move into cross-platform apps.