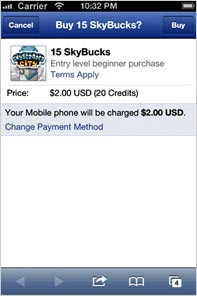 Earlier this year at the Mobile World Congress, Facebook announced plans to simplify mobile payments for Web apps that run on its platform through carrier-based billing. To that end, it partnered with mobile operators in 30 countries, including AT&T, Deutsche Telekom, Orange, Telefónica, T-Mobile USA, Verizon, KDDI and Japan’s Softbank Mobile Corp.

Facebook has now begun rolling out the carrier billing system aimed at making it easier for people to pay for in-app purchases made using Credits, the social network’s virtual currency.

In announcing the carrier billing option in February, Bret Taylor, Facebook’s chief technology officer, emphasized that the existing process for making Web-based payments via mobile was too cumbersome.

In a Wednesday blog post, the company said the mobile payment process in Facebook, including SMS verification, could take up to seven steps. With carrier billing launching on the majority of carriers in the U.S. and U.K., it will be reduced to just two steps without users having to type in any information.

Integrating the new system is also intended to be easy for developers, who can use Facebook’s payments API (application programming interface) to use Credits on their mobile Web site. Developers who already integrate Facebook payments on the mobile Web don’t need to make any changes.

What happens to Facebook’s 30% cut of digital sales through Credits by partnering with the carriers?

“Though it’s hard to be sure exactly what percentage of its revenue share Facebook is giving up to facilitate the new payment option, the company could be losing a substantial portion of its 30 percent cut,” notes Inside Facebook in a blog post on the topic. It suggests Facebook could be losing up to half its share to simplify payments.

The move also complements the recent launch of Facebook’s App Center by providing a convenient payment method that could help boost mobile revenue and app downloads and usage. ReadWriteWeb noted that these steps are part of Facebook’s larger goal of creating an app ecosystem to compete with Apple, Google and Microsoft. That’s not to mention its rumored plans to introduce a Facebook smartphone.