AT&T's "Daybreak" is Too Much of a Good Thing 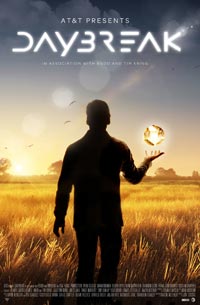 I'm a veritable whirlwind of creative ambition. Why, at breakfast the other day I spruced up a drab grey t-shirt with several fun streaks of maple syrup! The creative flourishes that heighten the senses, that invigorate otherwise colorless entities and experiences - they're, like, the air that I totally breathe. Choreographing step dances to arcade-game jingles? Adorning the Burger King condiment station with origami swans? That's SO me.

But even for individuals with my turbo-powered creative motor, sometimes "too much" isn't "barely adequate" or "a good start" or "an appetizer to the full meal that is a jury trial." Sometimes "too much" is just too much. Case in point: the beautifully shot, meticulously plotted, menacingly atmospheric, video-backstory-accessorized, app-dripping Daybreak, a more-ambitious-than-the-entirety-of-the-Vonnegut-and-Sandler-oeuvres-combined web series created by Tim Kring, AT&T, BBDO and, judging by the 70-plus names on the "creative credits" roll, pretty much every person who owns an iMac.

The series tracks the plight of Ben Wilkins, a "reluctant hero" (per the press release) who looks really slammin' in t-shirts with tapered sleeves. Wilkins' dad was a scientist guy of some repute and, as such, may have died under suspicious circumstances. There's a love interest, too, whose defining trait appears to be an ability to sleep in full makeup without fouling her be-paisley'd pillowcases. Throw in a bunch of bad guys, whose sneers were honed by hours in front of the guest-bath mirror, and the story practically scripts itself.

I'll say this about Daybreak: It wastes no time going about its business. Within two nanoseconds of clicking on the first chapter, viewers are transported into a neatly claustrophobic chase scene, in which the participants say stuff like "Shut up! Let me think!" Then we're whisked to a friendly neighborhood trailer park, where Wilkins banters about motorcycles with a lowbrow buddy and, later, exchanges unpleasantries with a pesky reporter who's probably not a reporter.

The first chapter ends with the delivery of a mysterious package, another chase and a generous helping of tear gas. Before it does, however, we're teased with something or other about a dodecahedron, the seeds of which were planted a few weeks ago on Fox's Touch. "Could sacred geometry also hold the key to our untapped human potential?" the site asks, to which I counter, "How about profane geometry?" Don't tell me you've never berated a rhombus. You haven't? Liar.

Will Ben survive? Will he be able to maintain a perfect 6:30-p.m.-second-day-post-shave shadow throughout the series arc? I don't know, because as of 1:14 p.m. ET on Thursday afternoon, Chapter 2 of the story hadn't yet gone live, despite an explicit promise on the Daybreak site that it "premieres 6/7/2012." Wait - is it possible the web guys are in on the conspiracy, too? Trust nobody. If your neighbor or mail carrier tries to make polite conversation, mace him and throw your GPS-enabled devices down the nearest sewer grate.

Speaking of GPS-enabled devices - segue! - AT&T doesn't smack viewers too hard in the face with its product placement; they deliver a blow more akin to a gentle love-tap on the shoulder. Characters urgently utter their action-show urgencies into AT&T-branded phones and use AT&T-branded tablets to do everything from de-encrypt stealthily recorded phone calls to download "Call Me Maybe." At the end of each chapter, we're treated to a subtle reminder about "AT&T technology featured in this episode." Somehow, the producers couldn't cram AT&T "air graffiti," which "uses GPS to enable friends to leave messages about certain locations," into the first chapter, but it's nonetheless amusing to think about the handsome protagonist air-graffiti-ing out a dispatch along the lines of "do NOT go near the far stall in the second-floor bathroom."

In the end, everything about Daybreak reeks of professionalism. The production values, pacing and acting are all network-caliber, while the plot is more layered than "handsome guy done gets chased all up and down and around the neighborhood." But here's the question I can't get past: Why bother hyping this as if it's the second coming of the Bourne trilogy?

It's not like we're lacking for action-drama content, which is abundantly available on every type of screen at our collective disposal. The story and characters are relatively involving and the series delivers on its promise of "an immersive experience," but in the end it's just another action series with fit young people yelling and running a lot. As a result, I can't say I have much desire to immerse myself all that deeply in its myriad mysteries. What happens next? Eh. I can survive without knowing.

Nonetheless, I hope we see more projects like Daybreak. I appreciate the effort and admire the care that went into its every value-added nugget o' immersivity. I just don't want to have to watch or consume it myself, is all.