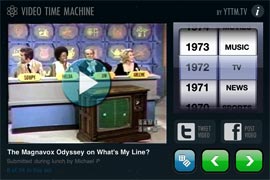 The publisher of classic TV DVDs, early rock-era CDs and some of the most offbeat pop culture content of the last century seems to have found its soulmate in the makers of the Time Machine line of apps for iOS from Original Victories.

Shout! Factory will acquire Video Time Machine, Political Time Machine and Holiday Time Machine from Original Victories. The company is partnered with entertainment industry veteran and President of Frederator Studios Fred Siebert in owning the rights to the apps.

As we said in our enthusiastic review of Video Time Machine here in MMD last June, the app does a masterful job of literally dialing up found video objects from the past century in YouTube and parsing them into handy categories. Created by the team of Justin Johnson, Matt Capucilli and Delbert Dean Shoopman III, the apps allow the user to set year and genre of video (movies, TV, news, etc.) to pull in nostalgia trips from the online video repositories. Over 25,000 curated clips comprise the available database of clips. The original Video Time Machine app was followed up by a specialized version on politics and holiday themes.

Shout! Factory will continually update the apps and bring them to Android. The partners expect to develop new iterations off of the platform as well. For a nostalgia merchant like Shout! Factory, the natural temptation would be to leverage the apps as marketing vehicles, but company founder Garson Foos tells MMD that he doesn’t want to change much. “The current monetization is selling the apps,” he tells us. “We want to create the best apps and content for that app possible, so we’ll use Shout content where appropriate, but not at the expense of the user experience.”

The app enjoys an enthusiastic following, rating 4.5 stars in the iTunes App Store from nearly 3600 scores. Almost a year after its initial release, the original app is still ranked as the 60th top Entertainment category app in the store.