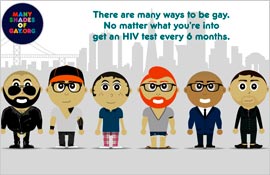 The San Francisco AIDS Foundation (SFAF) is launching an ad campaign to change behavior and get people motivated to get regular HIV tests. The cross-media marketing campaign, "Many Shades of Gay," includes a mobile- and tablet-optimized HTML5 Web site at www.manyshadesofgay.org, online banners, print and out-of-home ads. The effort also has drink coasters at local bars.

The timing is critical as San Francisco Pride is on June 23 and 24, and organizers say that if the campaign succeeds, SFAF will see the greatest turnout in history for National HIV Testing Day on June 27. "We wanted to do something unique that would reflect and inspire people, and encourage them to get behind the ideas and take more control over HIV," says James Loduca, VP public affairs for SFAF.

The city has one of the largest LGBT populations in the country and also one of the largest numbers of HIV-positive gay men, per Loduca. "What we know is that in San Francisco about 23% of the gay male population is HIV positive, which is a higher incidence level than for gay men in New York City,  and a higher incidence level than among black men in Washington, D.C."

He tells Marketing Daily that this is the biggest public-heath effort around the issue in a decade. "There is an urgent need to change attitudes around AIDS. We have made great progress, but we know we can reduce the level of new infections."

The new Web site uses an avatar-generator, which like all other campaign materials was designed and produced by San Francisco-based agency Attik, working on a pro bono basis. Attik Creative Director Ron Lim explains that the Web site is the cornerstone of the campaign, and as such is meant to be both fun and informative. Since it is platform-agnostic (because it is written in HTML5) it is also accessible on just about any digital device.

While visitors can create and share their own avatar, meant to reflect their individuality, they also learn about HIV testing, find testing centers, and set reminders to be tested again every six months. "I know when we set out to make site we wanted to make the most robust avatar generator ever," he says. Lim tells Marketing Daily there are something like six nonillion possible combinations of avatar characteristics. "The print and outdoor components direct everyone to the Web site and herald the message about getting tested every six months."