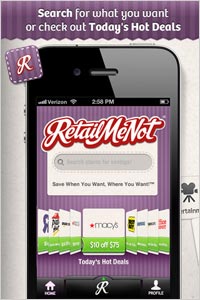 Online coupon provider RetailMeNot.com has introduced a new app for the iPhone that allows users to get discounts when shopping online or in brick-and-mortar stores.

People can use the free app to browse top coupons, popular stores, daily “Hot Deals” and product categories. It also includes a drag-and-drop feature to enter coupon codes for redemption and the ability to save coupons for later use.

At most participating stores, an app user will show a cashier their phone at checkout to redeem a coupon after the code is manually input. In other cases, people will be able to scan the app at the point-of-sale via barcode reader. The new app is part of RetailMeNot's broader effort to extend its coupon service from the desktop to mobile devices while users are out shopping. A companion Android app is also in the works.

Among the 1,600 in-store coupons available through the RetailMeNot iPhone app: $5 off $50 purchases at Target, 30% off select shoes at Macy’s and 50% of jewelry items at Bloomingdale’s.

In connection with the app launch, the company partnered with Ipsos Research on a new study showing that 62% of smartphone owners download apps and that more than one-third (34%) of adults have used a smartphone or tablet to shop or research a purchase.

The same percentage said they would be more inclined to make a purchase in a physical store if they could find a good coupon for a product or service on their mobile device. Some 15% say they’ve made an online purchase on a mobile device within a store because they found a better price online.

Consumers are still getting up to speed on mobile coupons. Only one in five have used a coupon they found online through their mobile phone or tablet while shopping in a store. About a third of those under 35 have done so, compared to 19% of those 35-54 and just 10% of those 55+. The findings were drawn from an Ipsos survey of 1,005 U.S. adults in mid-May.