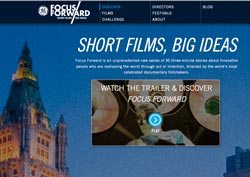 Though many brands call themselves “content creators,” few have the resources or talent to do it well. With the help of video publisher Cinelan, General Electric has set out to be the exception.

Earlier this month, the two unveiled a slate of short-form films, which first premiered at the 2012 Sundance and Tribeca Film Festivals, as well as on iTunes, Amazon Instant Video, Sony PlayStation, CinemaNow, and Vudu.

Produced by top documentary filmmakers, the films are supposed to explore “the human power of ideas and invention” -- an idea GE hope to associate itself.

Beginning July 9, in partnership with Cinetic Rights Management, GE and NYC-based Cinelan plan to expand their distribution network to Comcast, Time Warner, Cox, Charter, Verizon and Rogers. The plan is to achieve the widest distribution for their co-venture, Focus Forward, via cable and satellite VOD services, gaming system networks and Web-based free-on-demand platforms.

“Getting films seen has always been the toughest obstacle for short-form storytellers, so we’re proud that the ambitious distribution strategy we’ve developed … has been met with such enthusiasm,” said Cinelan co-founder Karol-Martesko-Fenster.

Also, as part of the ongoing day-and-date release strategy, all four of the three-minute films will premiere on Vimeo on Monday.

According to recent findings from Outbrain, content marketing continues to be one of the rising stars of the online marketing world. Along with GE, American Express, Proctor & Gamble, and General Mills use it alongside more traditional strategies to reach their target audiences.

Overall, the content delivery platform found that 100% of brand and agency marketers already utilize content marketing in their overall strategies, while 87% of respondents said video was the most common form of content created.

Financial terms of the partnership between GE and Cinelan have not been revealed.