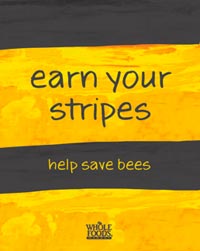 Pity the poor honey bee. Despite all kinds of scientific studies about its dwindling numbers, it still buzzes below the radar of most consumers, so Whole Foods Market is making this the summer of the bee.

The Austin, Tex.-based retailer says it’s putting bees center stage through the end of July, including a social-media campaign intended to raise funds and awareness.

The effort involves a tweet-to-give and pin-to-give program, to help support the Xerces Society, a nonprofit organization that protects wildlife through the conservation of invertebrates and their habitats. Consumers can also “Adopt a bee” through the company’s Facebook page. In-store events will include screenings of such films as the “Vanishing of the Bees” or “Queen of the Sun: What are the Bees Telling Us?”

Since bees pollinate more than 100 fruit and vegetable crops across the world, they are critical to organic farmers, so for every organic cantaloupe sold at Whole Foods Market stores, 25 cents will be donated to Xerces. The U.S. Department of Agriculture offers a 1:1 match for all donations made to Xerces, and both Annie’s and The Hain-Celestial Group are also donating funds to support Xerces. Other participating brands include Almond Breeze, Amy’s Kitchen, Evian Natural Spring Water, Mrs. Meyers Clean Day,  Stonyfield, Terra and Yogi Tea.

Whole Foods says the goal is to raise $180,000 to restore pollination habitats that Xerces will support. Whole Foods has also teamed up with Xerces to host webinars for Whole Foods’ farmers, to learn more about habitat restoration solutions for their farms.

“Pollinator conservation is critically important to protecting both global biodiversity and agriculture, but they’re increasingly at-risk from factors like habitat loss and pesticide use,” a Xerces Society spokesperson says in its release. “Through this partnership with Whole Foods Market, we’re expanding public awareness about the importance of pollinators and empowering farmers nationwide to help protect them.”

Xerces also works with other nonprofits to promote bee-boosting ideas, such as the University of Texas’ Lady Bird Johnson Wildflower Center.