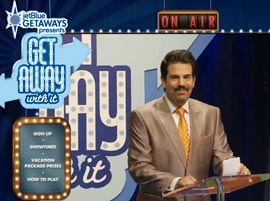 JetBlue Aiways is hosting a live, online game show this week called “Get Away With It.”

Contestants appear via Skype as the fake host, Mark Hammerberg, conducts the show live from New York City, in a studio outfitted with plasma screens where the contestants appear before him.

One winner per episode can win a getaway to the sandy beaches of Mexico or the turquoise waters of Turks and Caicos, among other destinations. Viewers can tune in to watch the live streaming games from their computers, smart phones or tablets at jetblue.com/getawaywithit. Episodes air daily at 10 a.m., 12 p.m., 3 p.m., 5 p.m. and 7 p.m. ET.

"For those who've always dreamt of being a contestant on a game show, we're giving them the chance to be in the spotlight -- all from the comfort of their own home," said Grant McCarthy, JetBlue's director getaways and ancillary travel, in a release

Previously, fans were limited to simply watching their favorite game shows from their living rooms. This new spin gives anyone with access to a computer a chance to play. Individuals over the age of 18 from across the United States can apply to play.

The airline also is playing off the age-old rivalry between Boston and New York by bringing the game show to the streets, challenging consumers to a city vs. city trivia battle.

An interactive storefront at 303 Park Avenue in New York City, an interactive pod at Copley Square in Boston, and video screens in five bus shelters throughout Boston will verbally beckon passersby for on-the-street gaming.

For those who miss the live game show, there will still be a chance to interact with a sweepstakes version of the game June 23 through July 10. Consumers can play daily for a chance to win up to $250 toward a JetBlue Getaways vacation package. Web site visitors also can watch repeat episodes of the live action and a highlight reel.