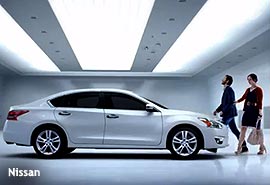 Nissan North America today is launching the campaign for its 2013 Altima. It will be the company’s largest ever. The effort, via TBWA\Chiat\Day, begins with four TV spots and a lot of digital advertising, plus print and out-of-home.

The tag for the brand has been “Innovation for All” since the launch of the Leaf electric car last year. For the Altima launch, however, the tag is “Innovation that Excites.” Earlier this year, Nissan launched a brand umbrella campaign, "Our Most Innovative Year Ever," to presage the rollout of five new vehicles over 15 months.

The Altima effort touts such features as a redesigned suspension, a category-unique, tire-fill alert feature that tells you when the tire is at the right pressure, new NASA “zero gravity” seats, 3D driver display, and power/acceleration benefits.

The advertising push will also bring in the "Wouldn't it be cool" mantra the company has been using for recent campaigns. That theme will also be applied to forthcoming efforts for the 2013 Pathfinder crossover and Sentra compact car.

Altima’s support begins with a 60-second spot that will also run on 3D cinema screens. The spot uses computer graphics to show how the new Altima is much evolved from its predecessor. Voiceover is by actor Robert Downey, Jr.

"We kind of decided as an entity a couple of years ago to hone in on innovation as a brand differentiator to set us apart from competition,” says Vinay Shahani, who in April took the reins as director of marketing at the Franklin, Tenn., U.S. arm of Nissan. “We found it has been a successful thing for us.”

Shahani tells Marketing Daily that the media mix will include a large digital component. "We know the majority of our consumers in market and ready to purchase are leveraging the Internet to do research and perform shopping tasks, so it makes sense to be there. The percentage of digital is much higher than in the past."

The company, for example, is doing a brand-level social media program later this summer called “Innovation Garage,” where people can showcase their own inventions and ideas for a chance to get it chosen for development.

Erich Marx, who heads up Nissan's social media programs, says that’s in the works. Also on tap is Altima Experience an online short-video series in five episodes about people who Nissan chose -– based on personal essays -– to travel to the automaker’s proving grounds in Arizona to drive the new Altima. “Those videos will start coming out [Monday], on Facebook, Google, Twitter and YouTube,” he says. “For each vehicle launch we will have special, fun, quirky, shareable social activation.”

Shahani says that in addition to takeovers of traditional portals, the digital mix includes third-party auto sites like KBB.com and Edmunds.com. There is also a renewed focus on behavioral targeting. "We can serve ads based on past behavior," he says. The digital strategy is also aligned with experiential marketing partners like Rodale and the Heisman Tour Presented by Nissan, which give the automaker both grassroots and digital opportunities.

The goal, says Shahani, is to grow market share at the expense of Camry, and Accord. "I would say that historically if you look at who our buyer is, we have a younger customer who is probably more interested in the performance of the vehicle and having something that looks unique, that meets their core needs. But we have bigger aspirations with this vehicle, so we can't settle for the share we have enjoyed," he says. "To grow it we have to go after Honda, and Toyota. Their customer bases are older and less emotionally driven [when it comes to cars.] So, obviously when reach out to them we have to talk about reliability and the value proposition."